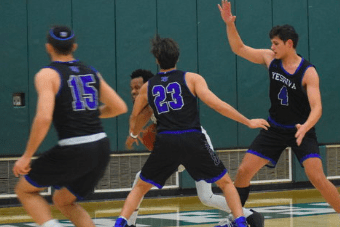 The Yeshiva University men’s basketball team dropped its first game of the season, but since that 72-60 loss to Occidental College in California on Nov. 9, the Maccabees have reeled off 24 consecutive wins.

Led by Woodmere resident and head coach Elliot Steinmetz, who won his 100th career game with Y.U. on Feb. 5, and 6-foot-5 senior forward Gabriel Leifer, of Lawrence, who is averaging nearly 17 points and 13 rebounds a game, the Maccabees, ranked No. 15 in Division III, finished first in the Skyline Conference’s Southern Division with a 16-0 record.

The conference playoffs got under way on Tuesday, with the top-seeded Y.U. defeating No. 8 Merchant Marine Academy 75-57 in a quarterfinal game. The Maccabees advance to the conference semifinals on Thursday versus the No. 5 seeded Farmingdale State Rams in a rematch of last year’s championship game…