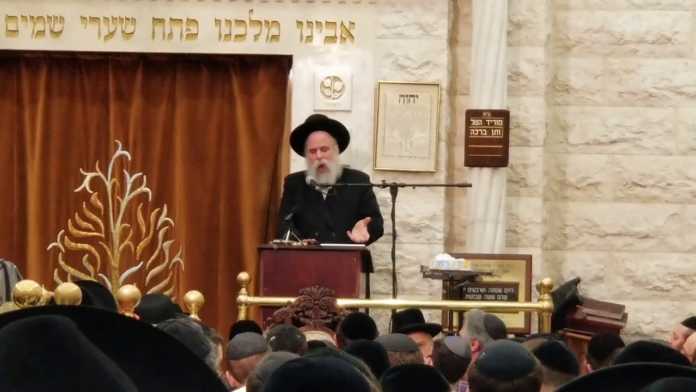 Rabbi Wachsman speaking in the 5 towns last year before one of the Yomim Tovim to give Chizuk to hundreds.

In his over an hour long address, Rabbi Wachsman spoke emotionally about the highly contagious virus that has brought the world to its knees, noting tearfully that in addition to taking lives it has shuttered shuls and yeshivos across the globe.

Drawing on the words of Chazal, Rabbi Wachsman observed that that unfathomable and frightening reality is prophetic, warning us that we need to search our souls and find the divine message that is being sent our way as we spend our days in solitude.

Turning to the Chumash, Rabbi Wachsman noted that there were three instances of plagues that swept through the Jewish nation. The first took place when the golden calf was constructed in the desert, the masses dancing frivolously around the metallic idol. The second plague occurred during the time of Korach, brought on by malicious attacks on Jewish leadership, unwarranted hatred and divisiveness, with the final incidence was a direct result of promiscuity.

The parallels to today’s world are unmistakable, said Rabbi Wachsman, taking aim squarely at the conspicuous consumption that is everywhere in our communities that has spread through our lives, much like a contagious virus.

Rabbi Wachsman said that he has seen lives destroyed by materialistic pursuits, with parents spending seven years to pay off the cost of a single wedding. The marriages that have taken place this week, with all of the frills and extras stripped away, should be examples for us of what a true Jewish wedding should look like.

“What are we getting for our money?” asked Rabbi Wachsman. “Just misery, a life of slavery. How can a sane nation, an am chochom allow such a thing to happen to us?”

Rabbi Wachsman had equally strong words for the many luxury products advertised in our Jewish publications as well as “ridiculous vorts that nobody wants to attend,” “meaningless vachtnachts,” lavish kiddushim and trips to Europe to visit holy sites, an industry he described as excessive and “an embarrassment.”

“How many millions, hundreds of millions must we pour into the hands of the children of our murderers?” queried Rabbi Wachsman. “How can we travel to tzadikim when we can owe thousands of dollars in schar limud or. chovos? The tzadik doesn’t want us. The tzadik doesn’t need us then. He wants us to live al pi Torah.”

Coming out strongly on another front, Rabbi Wachsman described lashon hara, particularly when spread electronically, as yet another infection going viral in our community and spoke about the destructive effects of conflicts that create terrible rifts within the Jewish community.

He called on listeners to use the coronavirus pandemic as an opportunity to formulate a new understanding of life and truth, both on the personal and communal levels.