A historic letter by Gedolim of America in support of President Donald Trump was released last night. The unprecedented letter of appreciation and blessing was spearheaded by Rabbi Moshe Margareten of Tzedek Association. The letter had been composed in the summer, however many signatures were recently added, and the letter has been released to the public last night ahead of the elections. 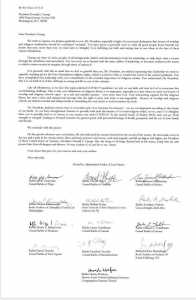 Below is a video of Hagaon R’ Shmuel Kamenetsky endorsing President Trump:

“So the Rabbi feels that everybody should vote for Donald Trump?”