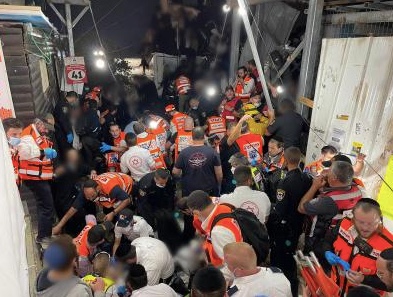 TRAGIC UPDATE: At least 27 dead, many others injured in a massive stampede that occurred in Meron, Israel, during Lag Baomer celebrations tonight.

Phone service isn’t working well in the Meron area, if you are trying to reach a family member or a friend, you can contact the following number +972-54-666519.

Vice President of Operation Dov Maisel speaks about the tragic incident at Meron and the work of the UH team there. pic.twitter.com/Xk7PesL6zS

🇮🇱🚨 — TRAGEDY: Multi casualty incident with deaths and many injuries reported, after a metal platform collapsed in Meron during Lag Baomer celebrations tonight — More to follow.

BREAKING UPDATE: According to initial reports at least 10 people are seriously injured in Meron incident. Medical Choppers are on their way — More to follow. pic.twitter.com/M3rGoR2eMD

United Hatzalah volunteers are currently responding to a collapsed structure that took place during one of the major bonfires in Meron near the Toldos Aharon bonfire resulting in a mass casualty incident.

Reports are suggesting that numerous people are unconscious and volunteers are CPR is in progress on a number of individuals who were struck by the building and lost consciousness.

United Hatzalah volunteer EMT Yosef Chaim Ben Tzion who was one of the first responders at the scene and participated in the CPR relayed: “A number of the injured are in critical condition and a large number of people were moderately injured after a grandstand collapsed with dozens of people on it. Doctors, paramedics, and EMTs from United Hatzalah who were providing medical security for the event rushed to respond and initiated CPR on a number of individuals while treating the others for their injuries.”

Due to the nature of the incident, members of the Pychotrauma and Crisis Response Unit were dispatched as well in order to deal with those who are suffering from shock and emotional stress reactions.