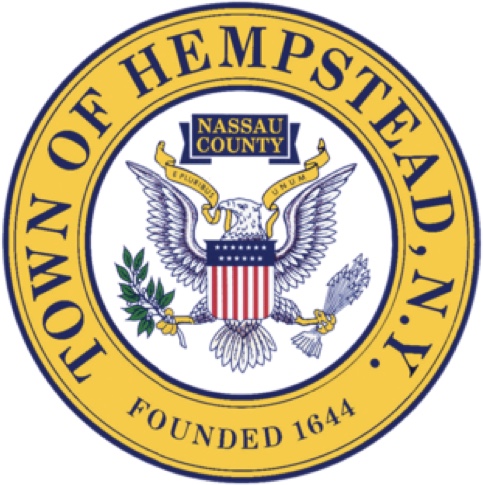 The Town of Hempstead strongly condemns Ben & Jerry’s and the BDS movement. There will be a town hall meeting this Thursday to discuss and cease any contracts associated with Ben & Jerry’s and its parent company Unilever.

5TC thanks Bruce Blakeman and the Town of Hempstead for their strong & bold support during these trying times!

At the Town of Hempstead, we stand with our Jewish neighbors against anti Semitism and maintain a strong stance against the Boycott, Divestment and Sanctions (BDS) Movement. In fact, we were the first municipality in our region to adopt anti-BDS legislation, targeting the BDS movement that attempts to isolate israel and other U.S. allies from the international community, Indeed, this law prohibits town government from doing business with individuals or companies that openly boycott against America. Israel and other allies

Unfortunately, recent actions by Ben and Jerry’s to support the BDS movement have revealed the company’s anti-Israel stance. Please join me and Supervisor Don Clavin on Thursday, July 22nd at 10 a.m. at Hempstead Town Hall (1 Washington Street, Hempstead), along with local officials, community members and spiritual leaders as we will announce our action to direct all Town of Hempstead commissioners to cease any contracts and municipal business with Ben and Jerry’s and its parent company, Unilever, as we deploying our strong anti-BDS legislation and demonstrate our commitment to Israel. At the Town of Hempstead, we will continue to work only with those who reject acts of hate and economic hostility.

We stand with Israel and our Jewish community, and hope you can join us on Thursday at 10a.m. for this important announcement. 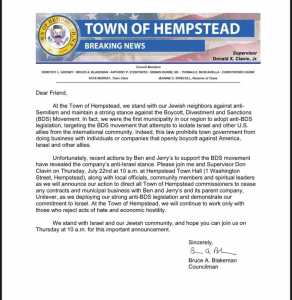