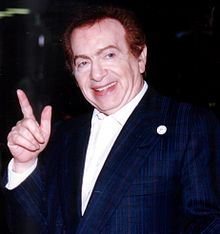 Jewish standup comedian Jackie Mason passed away at the age of 93 on Saturday night. Mason was born Yacov Moshe Maza in Sheboygan, Wisconsin in 1931 to immigrant parents from Belarus.

Mason’s death was reported by The New York Times as told to them by his lawyer Raoul Felder. He died at a hospital in Manhattan on Saturday. No cause of death was given.

Mason was a Tony and Emmy winner famous for his one-man shows on Broadway, and for playing the voice of Rabbi Hyman Krustofski, or Krusty the Clown’s dad, on “The Simpsons.”

The irascible Mason was known for his sharp wit and piercing social commentary, often about the differences between Jews and gentiles, men and women and his own inadequacies. His typical style was amused outrage.

So sad to hear of the passing of Jackie Mason.

One the great comedic voices of the Jewish people.

I’ll always remember him for his work on The Simpsons on the episode “Like Father, Like Clown” (S3E6) playing Krusty’s rabbinic father in a story that mirrored his life.

As you can see from the opening he was clearly raised in a home that valued Torah scholarship.

You can find the whole thing here, published in his father’s sefer:https://t.co/8GlIzj1ycB pic.twitter.com/nshwekXAgP

Remembering Jackie Mason. This photo was at my birthday dinner two years ago. May his memory be a blessing. pic.twitter.com/skrE4LStnM

Love and prayers for our friend Jackie. Irreverent, iconoclastic, Funny, smart, and a great American Patriot. He will be missed by so many. God Speed Jackie. Love and prayers to him and his wonderful family. https://t.co/dmRjr4HgzA

May his memory be a blessing.