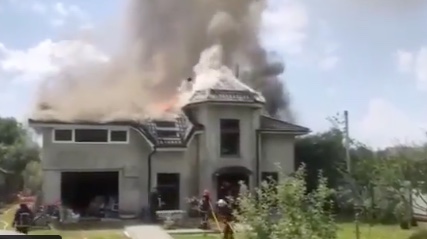 ✡️🕯 — UPDATE: The 3 Buchrim tragically killed in the Ukraine plane crash this afternoon, were identified as Avrohom Fromowitz Z”L a chosson from Monsey, Lazer Brill Z”L from Williamsburg and Heshy Weiss Z”L from London. pic.twitter.com/QgDFJRSabD

—
Three Bachurim, two from NY (Monsey & Willamsburg) and one from London, were Niftar after their small plane crashed directly into the roof of a private villa. The pilot was also killed.

The group had been visiting Mekomos Hakedoshim (Holy Sites) in the Ukraine. They had been learning in the Mir Yeshiva this past Zman.

Sources are still unclear as to why the plane went down. Local Ukraine officials are currently in contact with Misaskim in order to ensure proper Kavod Hameis is abided to.

UKRAINE: TRAGIC: BDE: 3 Bucherim, two from NY and one from London, were Niftar after their small plane crashed directly into the roof of a private villa. The pilot was also killed. pic.twitter.com/1u0tv8pcLT