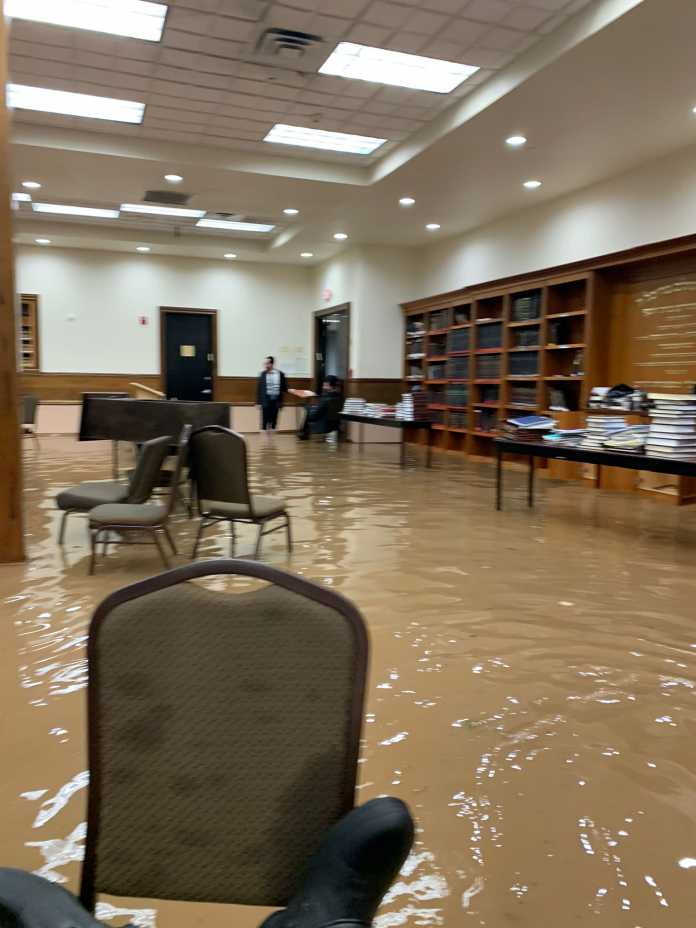 Just days before Tropical Depression Ida hit, Yeshiva Ohr Simcha of Englewood celebrated the completion of its beautiful new seforim shranks, just one of multiple renovations made to the yeshiva after last spring’s successful fundraising campaign raised more than $800,000 for capital improvements.

And then the water came, and in a flash, all of the improvements made to enhance the yeshiva building were completely ruined.

Meteorologists had been forecasting heavy rains and even potential flooding as the remnants of Hurricane Ida arrived in New Jersey, but the storm’s intensity went far beyond anything that anyone was imagining.

Located as it is yards from the Overpeck Creek, the yeshiva high school was accustomed to the occasional problem during severe rains, and when a small trickle of water began trickling in on the night of September 1st, no one was particularly alarmed.

“We barricaded the doors like we do when there is a bad storm and at first it was fun and games, with everyone jumping up and down and having fun until we realized that this was beyond anything we had ever seen before,” said Rabbi Menachem Strassfeld, s’gan menahel at the yeshiva.  “The boys were great, blocking off doors and when the water started rising, brushing it into the drain in the shower room.”

Outside, motorists were stranded in the high waters, with some taking shelter atop their cars.

Things went from bad to worse when the water pressure broke one of the glass panes in the yeshiva’s front door, with the water level rising considerably until it was well over knee height. Multiple emergency calls were made to 911, elected officials, the Englewood Fire Department and Chaverim, among others, and since there were transformers located inside the building, the decision was made to shut off the electrical system as a safety measure.

All 60 of the yeshiva’s students packed up their tefillin and a change of clothing and were evacuated in groups after Chaverim arrived and firefighters arrived on scene. Some were transported in a van that was pushed to dry land and several more walked to safer areas, while yet another group was ferried out by boat.  While, baruch Hashem, the students all escaped without injury, the yeshiva building itself sustained catastrophic damage.

“I went in with the insurance adjuster,” said Rabbi Strassfeld.  “While the water is gone, there is dirt and mud everywhere and just cleaning that out will cost over $100,000.”

The yeshiva’s regular insurance does not cover flooding, and its flood insurance policy will only pay up to $300,000 for flood-related damage, with a $50,000 deductible. It is unknown at this time if FEMA will be providing funding to those who sustained storm-related damage, and if so, how much assistance could be coming from the federal government, making clear the need for an emergency capital campaign.

“We are talking well in excess of $1 million in repairs,” said Rabbi Elchonon Butrimovitz, the yeshiva’s menahel.  “Every wall has to be cut, with the insulation replaced.  Every bed has to be replaced and every dresser.  We had over 100 brand new chairs in the bais medrash and all of our desks and tables and chairs will need to be replaced.  All of my kitchen equipment shorted out and the hot water heater and boiler are also gone.”

Currently, it is impossible to assess the extent of the damage to the yeshiva’s electrical system, but with its transformers submerged during the storm, it is likely to be extensive.  Also destroyed were all of the yeshiva’s air conditioners and heaters, as well as its computers, phone and video systems, its inventory of office and kitchen supplies and many of its students’ possessions.   Thankfully, the school’s sifrei Torah remained dry in a waterproof safe and a large number of its seforim remained above the water line and escaped damage.

The yeshiva is temporarily relocating to Camp Monroe and a cleanup crew has begun the tedious job of getting the building to the point where the situation can be fully evaluated, the first step in the extensive and costly repair process to make the building habitable once again.