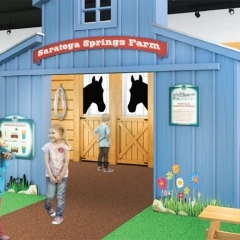 Governor Kathy Hochul today announced construction has begun on a $3.1 million project to relocate an improved and expanded Children’s Museum at Saratoga to the historic Lincoln Bathhouse in Saratoga Spa State Park. The facility’s relocation will double its space and increase accessibility for guests of all ages. This project will mark the third museum to join the Saratoga Spa State Park system.

“One of the biggest priorities for my administration is to keep New York State at the forefront of tourism with all we have to offer, and the Children’s Museum at Saratoga exemplifies this goal,” Governor Hochul said. “Saratoga Spa State Park is already hotspot for visitors with world-class arts and culture venues, performances, and outdoor recreation. With the addition of the Children’s Museum, we have added yet another valuable attraction that to helps children learn through interactive, educational activities.”

The original Children’s Museum at Saratoga Spa State Park has outgrown its current 8,000-square-foot facility, where it serves 37,000 people each year. The museum will occupy 16,000 square feet of the Lincoln Bathhouse, including a 4,000 square-foot interior courtyard, offering expanded space for refurbished exhibits and full Americans with Disabilities Act accessibility. The $3.1 million project is supported by private donors and a $600,000 grant from Empire State Development. Construction is expected to be complete in spring 2022.

The new project will facilitate a partnership between the Museum and neighboring organizations in the park, allowing it to enhance the Museum’s tradition of nature-based educational programming through easy access to 2,400 acres of trails, streams, and trees; and to expand educational offerings for children 0-13. The larger classroom space will enable the Museum to serve more people in a socially distanced manner, as well as a studio for production of digital content.

Children’s Museum at Saratoga Executive Director Sarah Smith said, “The idea to move to the Lincoln Baths is not new. Years ago, a board member suggested looking into moving to the Lincoln Baths. It took the pandemic to give us the time and the energy to make this leap for the future of the Museum and to create new opportunities for the children of the Capital Region. Our new facility and our merger with The Children’s Museum of Science and Technology will enable us to engage children in hands-on learning in the Museum, in the classroom and throughout our community.”

State Parks Commissioner Erik Kulleseid said, “The Children’s Museum is a wonderful cultural and educational resource, and the move to the Lincoln Bathhouse will help bring new activity into this historic structure at the gateway to Saratoga Spa State Park. The Children’s Museum is a welcome addition to the array of non-profit and business partners to offer a ‘Park of the Arts’ that brings people from around the world for singular range of choices for recreation, relaxation and cultural experiences.”

Empire State Development Acting Commissioner and President & CEO-designate Hope Knight said, “The future home of the Children’s Museum at Saratoga in Saratoga Spa State Park ensures that it will remain an engaging destination that welcomes residents and visitors alike. By doubling its size and moving within the Lincoln Bathhouse, the museum can add new programming that complements the existing park infrastructure and appeals to even more families.”

Senator Daphne Jordan said, “The Children’s Museum at Saratoga is a cultural, educational, and recreational treasure for our community. This $3.1 million expansion project – supported by generous private donors and a crucial $600,000 grant from Empire State Development – will result in a relocated, improved, and expanded Children’s Museum at Saratoga to the historic Lincoln Bathhouse in Saratoga Spa State Park. With a 32-year record of excellence and delivering unique, hands-on learning and experiential opportunities, the Children’s Museum at Saratoga truly is the place where learning and play go hand-in-hand and is a beloved community resource that fosters creativity and imagination. As Einstein said about the power and importance of imagination: ‘Imagination is more important than knowledge. Knowledge is limited. Imagination encircles the world.’ This expansion project for the Children’s Museum at Saratoga will foster children’s imaginations, helping them grow their talent and creativity so it can encircle and benefit the world. I thank Governor Kathy Hochul, and New York State Parks and Recreation Commissioner Erik Kulleseid for making this important project a reality.”

Assemblymember Carrie Woerner said, “I was delighted to help secure funding for this dynamic use of a venerable site. This new old building and the surrounding park will provide so many opportunities for children, their parents and teachers to learn and explore. The project will provide room for the children and the institution to grow and will expand the options for residents of our community and the entire region to enjoy this historic park.”

The Beaux Arts-Neoclassical style Lincoln Bathhouse, completed in 1930, is a key component of the distinctive architecture in the park, and is listed as a National Historic Landmark.

Saratoga Spa State Park currently welcomes an estimated 3 million visitors each year. In addition to the nationally known Saratoga Performing Arts Center, the SPAC School of the Arts, the National Museum of Dance, the Saratoga Automobile Museum, the Gideon Putnam Resort and Roosevelt Baths and Spa, and the Spa City Farmer’s Market, Saratoga Spa State Park offers a multitude of recreational and cultural amenities including golf courses, clay tennis courts, a nature education center, the Spa Little Theater, cafes and restaurants, and miles of trails for walking, running and biking, all set within landscapes including National Historic Landmark architecture and 2,400 acres of varied natural habitats.