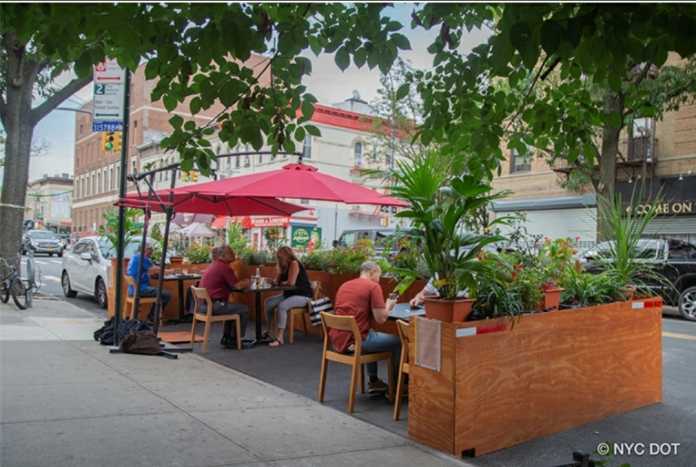 The vast majority of Manhattan residents supports outdoor dining, the highest rate of approval out of any of the five boroughs, according to a city survey quietly conducted last year (and not widely released) — stats that bolster the permanent outdoor dining program against the complaints of a small group of naysayers that has sued.

A whopping 84 percent of Manhattanites say they support repurposing curb space from free private vehicle storage to make room for the outdoor dining sheds and structures, which restaurateurs say helped them stay safe and afloat during the Covid-19 pandemic. And citywide, no borough had fewer than 64 percent of residents that support al fresco dining, according to the Department of Transportation’s Citywide Mobility Survey conducted in October, 2020, yet kept in a vault for a year. The previously unreported numbers are even more crucial to the fight to maintain the much-loved program as some critics have sued to stop it, citing increases in noise and trash and decreases in parking, and even referring to the curbside structures as “slums.”

The opposition has garnered much of the attention, but the city must listen instead to the majority that wants to keep the program alive, advocates say.

“Once again, the data proves that New Yorkers support space on our streets for people over cars,” said Cory Epstein, spokesperson for Transportation Alternatives. “We know what works, and we know that any minor change on our streets will inevitably inspire opposition from a vocal, unrepresentative minority. Our leaders need to stop listening to the loudest voices in the room and stop delaying projects that make New York City more resilient, equitable, and safe. Follow the data and follow the policies that work. Changes to streets will inevitably become the norm, and they make our city better off for many years to come.”

The DOT’s survey solicited responses from 905 participants across each of the boroughs, selecting only people who had previously completed an earlier mobility survey in 2019. Of the 905 respondents, 167 were from Manhattan, according to the survey data, which is also recorded in the city’s Open Data portal.

And of the 167 people from Manhattan, only seven said they outright opposed outdoor dining; 143 said they supported it, and just 17 said they felt neutral about it.

It’s unclear why the agency did not widely distribute the results (an agency spokesperson said only, “I just don’t know”).

Here’s how residents of the other four boroughs responded (the DOT said the results were “weighted to match the population of New York City across key sociodemographic dimensions”):

It doesn’t seem like any media outlets picked up on the survey. The Nov. 16 New York Times front-page story, “What’s the Future of Outdoor Dining in New York?” cited a different study of outdoor dining by Transportation Alternatives, but not the one from DOT. And TA’s numbers were lower than the city’s — with 64 percent of respondents citywide saying outdoor restaurant seating is an important use of curb space in their neighborhood, including 78 percent of voters in Manhattan.

DOT Commissioner Hank Gutman has long championed the program because it “shows how we can reimagine our streetscape to better serve our neighborhoods.”

“We have learned so much about how to make this overwhelmingly popular program even better, and that’s exactly what we’re going to do,” he said. “We’re thrilled to start this robust conversation with the public to craft guidelines that will increase accessibility, safety and address concerns such as noise, hours of operation and sanitation.”

The city’s Open Restaurants program — created during the rule-free Covid emergency last year — is making its way through the city’s land-use review procedure as part of the de Blasio administration’s bid to make a codified program permanent.

The concerns about the program as outlined in the lawsuit — such as excessive noise, an alleged de-regulation of public space, trash, and inaccessibility, especially for the disabled — are supposedly going to be addressed as part of this zoning change review process (DOT is continuing to solicit feedback via this survey, through Dec. 31).

Last week, the City Planning Commission approved the permanent outdoor dining program, but a final stamp of approval from the City Council is not expected until late this year or early next year.

It’s clear that not only is the program very popular, according to multiple surveys and the city’s own data, but it also helped save many restaurants from going under, and many workers from losing their jobs, said the executive director of the NYC Hospitality Alliance, which has been advocating for the permanent program,

“Open Restaurants has saved more than 100,000 industry jobs and countless small businesses from financial collapse, and the City Planning Commission’s recent approval vote is a critically important first step towards developing a sustainable future for this very popular program,” said the group’s executive director, Andrew Rigie. “We look forward to working with the city to ensure that managed outdoor dining continues to support small businesses, crucial industry jobs, and vibrant city streetscapes for years to come.”