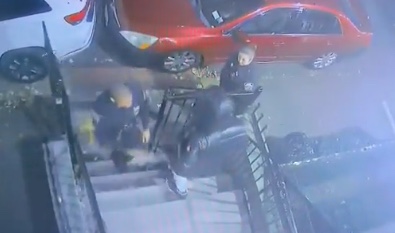 Two cops arrived at Beaumont Avenue and East 187th Street (Belmont) at around 8:00 PM, after a report came in of a man with a gun.

They found a man sitting in front of a home and asked the suspect to take his hands out of his pockets. The suspect immediately drew a firearm and began shooting as a brawl broke out.

A female officer was shot twice in the arm. Shea says she returned fire about five times, striking the assailant about three times.

The second officer, an eight-year veteran, was struck once while struggling with the suspect. The bullet entered in his armpit and exited the front of his chest.

Thankfully the officers are listed in stable condition and expected to survive.

Watch as @NYPDShea, @NYCMayor, & NYPD executives discuss the shooting in the Bronx where two of our officers were shot. https://t.co/GAy5HWMrGa

As most NYers were w/ their families preparing for the holiday, these brave officers were responding to call from a community member, putting it all on the line, fighting with a career criminal who had a stolen / illegal gun — all to keep NYers safe. pic.twitter.com/cmiMxxvx4Z

Footage of the incident below (Warning: Disturbing Footage):

Footage of the NYPD shooting in the Bronx tonight. pic.twitter.com/EUmh23p1HC

They endured bullet wounds, but all they talked about was keeping people safe.

Tonight I want to give thanks — to these officers, to the men and women of the NYPD and to the hospital staff at St. Barnabas who took such good care of our officers this evening.