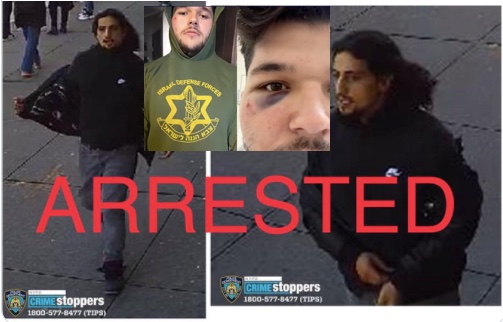 The suspect accused of attacking a Jewish man for wearing an IDF sweatshirt in December has been arrested.

Blake Zavadsky and Ilan Kaganovich, both 21-year-old college students, were shoe shopping on 86th Street in Bay Ridge on Dec. 26 when they were approached by two men.

Zavadsky said one of the men told him, “Do you mess with the dirty Jews?” and then, referencing Zavadsky’s IDF hoodie, said, “You have five seconds to take off that sweatshirt or I’ll rock you.”

The man then punched Zavadsky twice in the face while the other man threatened to attack Kaganovich. As a final insult, iced coffee was tossed onto Zavadsky’s sweatshirt.

Both men said it was the first time they had experienced antisemitism in New York.

We thank the @NYPDHateCrimes for getting this monster off the streets of NYC!

Hopefully @BrooklynDA will prosecute this violent criminal to the fullest extent of the law. pic.twitter.com/ugsxzAfcdt

Thank you @NYPDHateCrimes for your dedicated work in apprehending the individual responsible for this antisemitic assault. https://t.co/LHUPTlTzJ5