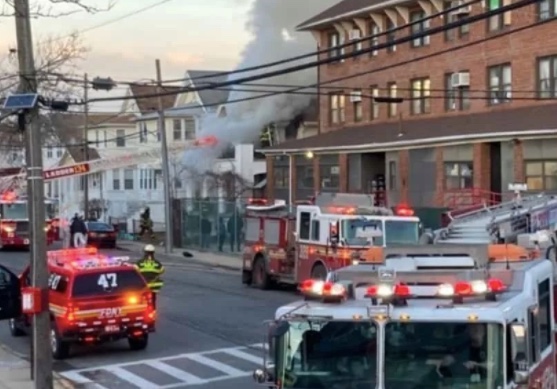 Just to give you all a heads up in case you hear anything else.

B’chasdei Hashem we had just sent away the last bus on Beach 13th when flames started shooting out of the house right behind our school on B. 13th. Boruch Hashem, a fire truck happened to be on the next block, and called for backup.

As we watched the flames shoot out of the second story, I recited the complete Modim for the open miracle of having no one in the building.

Boruch Hashem the flames were contained but it came close.

The firefighters are mamash heroes! We watched as they fearlessly went into the burning building with flames shooting out around them.

We have a slight smoke smell in our building. We are opening windows to try and air out the building. Hopefully it will be gone by tomorrow morning.

I just spoke to a Fire Marshal who said the house was tested and there are no toxins in the air..Give your children an extra hug tonight.

Thank you to all the first responders @FDNY @NYPD101Pct for their quick response to tonight’s fire in the Rockaways. To the neighbors that provided food and clothing & @nycoem for coordinating with @redcrossny in finding shelter for the displaced residents. pic.twitter.com/7ux6E3vkcA