UPDATE: On January 11th, the search began. Nearly three dozen friends of the family arrived in New Orleans to look for Michael.

First, they filled out a missing person report with the NOPD, then they set up a “command post” in a conference room at the Marriott Hotel on Canal Street.
The group’s spokesman, Nathan Ginsbury, says the search team has mapped out possible sightings of Gelfand, starting from the Magnolia Hotel at 525 Gravier Street where Gelfand checked out on January 6.

From there, the search has broadened. From the Highway 90 overpass to the west, and from Elysian Fields to the east. The team is searching for Gelfand in a grid pattern in cars, on bicycles, and on foot.

They’re also asking for surveillance video from places where people think they’ve spotted Gelfand, and from businesses where Gelfand’s credit card has been used in the last few days.

As the search continues please continue to Daven for Mordechai ben Shira Golda.

UPDATE: The Lakewood Scoop is reporting that there is a $10,000 reward being offered for information that can help find out where Michael Gelfand is, adding that he was last seen near Canal and Carondelet Streets in NOLA. 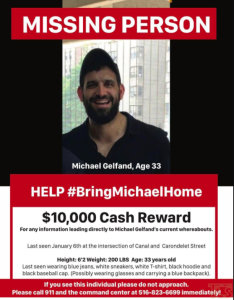 Individuals are warned not to head to New Orleans to assist in the search on your own unless you have a group of trained participants joining in the search efforts. New Orleans is known to be a dangerous place. 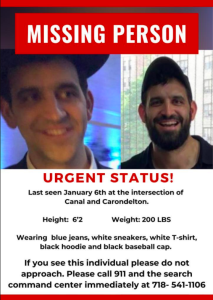 Police say Gelfand arrived in the city on Jan. 5 for business and was scheduled to return home the following day.

His family has not heard from him since January 6th, according to NOPD.

Anyone with information regarding the whereabouts of Gelfand is asked to contact:https://www.facebook.com/NOPDEighth

Please have Mordechai ben Shira Golda in your Tefillos. May we hear Besuros Tovos!