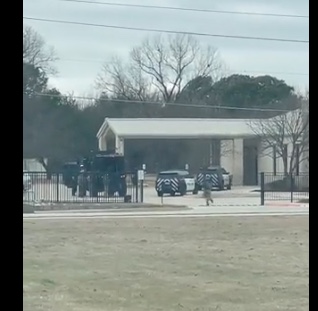 All hostages are out alive and safe.

All hostages are released and safe after stand off that lasted more than 10 hours on Saturday. According to local media, the hostage-taker has been shot dead.

—
UPDATE: A loud explosion was reportedly just heard coming from the congregation Beth Israel synagogue where a standoff has been going on for 10 hours with a hostage taker followed by what appeared to be gunshots.

#DEVELOPING We just heard some type of loud bang coming from the scene of the #Colleyville #BethIsrael Synagogue, where the hostage situation remains ongoing.

—
UPDATE: RNSP has informed 5TC that local law enforcement will be stationed outside local Shuls in light of the situation. RNSP as well will be increasing patrols in the area.

The community is asked to keep all involved in this tragic situation in mind in your Tefillos.

In light of the hostage situation affecting a shul in Colliville, Texas, the RNSP is stepping up patrols. We are in contact with local law enforcement, who are stationed at local houses of worship and also beefing up patrols. pic.twitter.com/45htaV8ozy

UPDATE at 6:15 p.m.: Shortly after 5:00pm, a male hostage was released uninjured. This man will be reunited with his family as soon as possible and he does not require medical attention. FBI Crisis Negotiators continue contact with the subject. Updates will be provided as they become available.

On Saturday, January 15, 2022, at approximately 10:41am, the Colleyville Police Department received a

Call for Service in the 6100 block of Pleasant Run Road.

Officers arrived on scene and observed an emergency situation that warranted evacuation of the surrounding areas and an external perimeter was established. The Colleyville Police Department is on scene, along with the FBI’s Dallas Field Office, the Texas Department of Public Safety, North Tarrant Regional SWAT Team, and other neighboring agencies.

In addition to the subject, law enforcement has confirmed there are others inside but no injuries have been

reported. FBI Crisis Negotiators are in communication with the subject. This is a joint investigation of the

Colleyville PD and the FBI’s Dallas Field Office; it remains an active operational and investigative scene.

Updates will be provided as they become available.

The gunman entered during Shabbat services and is saying:

“If anyone tries to enter this building, I’m telling you… everyone will die”.

The suspect stormed in during a Bar Miztvah celebration and says he is muslim. A Rabbi and at least 3 people are being held hostage.

The hostage-taker is claiming to be armed and says his sister is Aafia Siddiqui, who was convicted in New York of trying to kill US military personnel. The hostage taker is demanding his sister be released from prison.

Siddiqui (from Pakistan) was sentenced to 86 years in prison after she tried to murder American soldiers in 2008.

VIDEO: @FBIDallas, @ColleyvillePD and SWAT established a perimeter outside Congregation Beth Israel — where a small group of people are being held hostage. The initial takeover was heard while streamed on Facebook Live during morning service. @FOX4📱IG: @smajority141 pic.twitter.com/X5HFWZS40L

What we know about the Colleyville synagogue hostage situation: FBI, police continue to negotiate with suspect
It's believed 4 hostages taken, including rabbi
No injuries reported
No threats reported at other locations https://t.co/l4Q06WHQsi

We’re Thinking About Your Future. Are You?

No Child Left Behind: Achiezer’s Camp Fund Campaign Ensures Every Child can Experience the Magic...