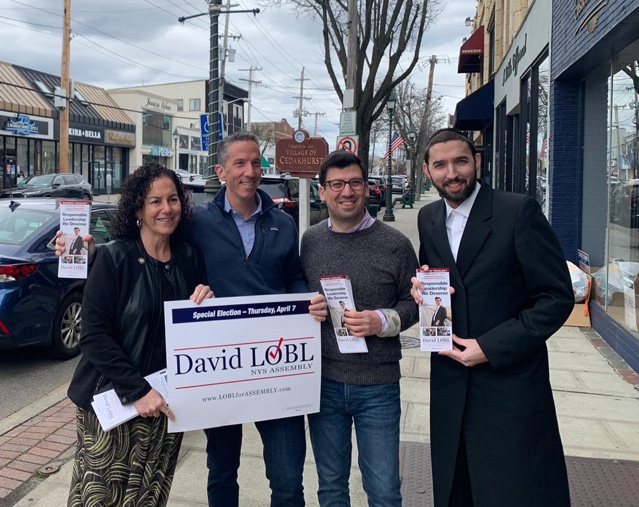 Cedarhurst NY– NY Assembly Candidate David Lobl announced key endorsements from four members of the New York State Assembly:
“Democrats are in control of all 3 branches of government, to impact policy and deliver resources in a real way, your elected representative needs to be part of a super majority conference. If you really care about delivering real results for your local neighborhoods, especially during these trying times as we face countless unprecedented challenges in Albany, David Lobl is uniquely qualified to navigate the halls of state government and as a majority member will be able to deliver results. Friends, on April 7th, send David Lobl to Albany to join us in this fight,” said Assemblymember Simcha Eichenstein.
“David Lobl has my full endorsement for the NYS. Assembly because I need a strong partner in the Majority next door.  Working together, we will partner to help our constituents from having safer streets to being protected from another Super Storm Sandy. Having David as a partner in Albany would mean the South Shore of Long Island/Queens would be in the strongest shape it’s ever been,” stated Assemblymember Stacey Pheffer Amato.
“Today I am proud to endorse David Lobl for the NYS Assembly. With the rise in Anti-Semitic hate crimes and overall crime- I need a strong partner who will fight for our community in Albany. David has a stellar track record of delivering for Jewish communities across NYS from supporting Israel to funding for our Yeshivas. I have no doubt that serving with David in the Assembly majority will only strengthen our voice. His independent voice is very much needed in Albany. Please make sure you vote for him on April 7th,” remarked Assemblymember Dan Rosenthal.
“After serving 5 successful years in Albany, I understand what it takes to get things done and proud to endorse David Lobl for the New York State Assembly,” said former Assemblymember Phil Goldfeder. “David has the experience, relationships, and work ethic to actually deliver for the neighborhood and his pragmatic approach will ensure that our values are well represented. It is critically important that elected officials have more than a platform but rather a seat at the table where decisions are made, and David is the only candidate who will serve the Five Towns and every community he represents.”
“I’m running for the New York State Assembly because the health and safety of our families and our communities is my number one priority. From supporting our first responders and standing with law enforcement, to reducing our tax burden and investing in our children’s education, I have the experience and commitment the South Shore needs fighting for us in Albany,” stated David Lobl.
David Lobl is a leader in bringing government services and funding to communities. He has experience in the public and private sector, including advocating on behalf of individuals and families with developmental needs. Lobl was a trusted Senior Jewish Advisor to key elected officials, where he spearheaded and saw to fruition important policies including a first in the nation anti-BDS executive order, protection for houses or worship, a stronger New York-Israel relationship, and educational services. During Hurricane Sandy, David played an integral role in bringing State agencies and aid to many of the hardest hit communities.
The special election for the 20th Assembly District is Thursday, April 7th.
###