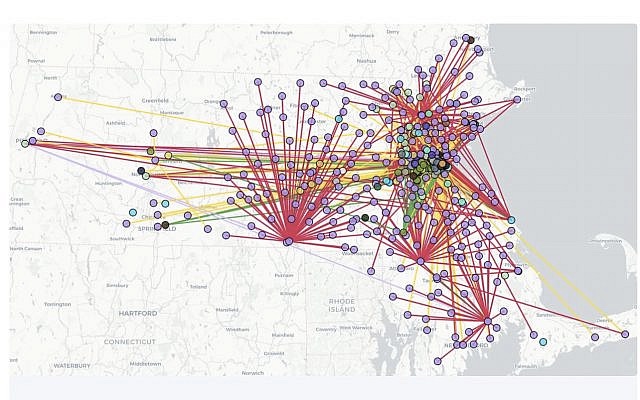 From the blog of Scott Cushing at the Times of Israel

Maps get people from one destination point to another. They are a guide and reference tool that educates the user based upon facts.

In Boston, however, a group of mapmakers had a much different idea. They created a map that not only singles out people based upon their faith, but their way of life and livelihood. For even a casual observer, the sole objective of the map was to stir hatred and violence.

But even the most casual observer realized that this was no ordinary map. It was a “Jew Hatred” map. Historians will also notice another characteristic of this so-called map; it is a collection of lists. A list of Jews and their home addresses. Sound familiar?

In unveiling their trope filled product, the “Mapping Project” alleges connections between Jewish and pro-Israel groups with government, politicians, police, media, and institutions. The map also pinpointed businesses, synagogues, schools, charities, cultural centers, universities, and related organizations that were Jewish or controlled by Zionists. They noted in their “pinpoints” the various networks that supported Israel or intersections they defined as support.

It is a clear road map of “Jew Hatred” and antizionism.

The map also drew lines between organizations that Jews have supposed influence over or control. Their commentary said it all: “Our goal in pursuing this collective mapping was to reveal the local entities and networks that enact devastation, so we can dismantle them.”

The project goes on to attempt to show alleged linkage between networks of “illicit ties” into parts of the business community. Google, Apple, and Pfizer were singled out specifically. Jewish synagogues, newspapers, art collaboratives, charities, ADL and JCRC were identified by the BDS group for “supporting the colonization of Palestine and violence worldwide.” The allegations were purely subjective and defined by the mapmakers and their definitions. Or, should we say, prejudices.

Reaction to the map has brought questions to light about the connection between the BDS movement, who funds it and its foundations in “Jew Hatred.” “Stand With Us,” a nonpartisan educational organization that fight antisemitism and supports Israel stated, “Jewish communities in the United States and in other parts of the world are extremely vulnerable at the moment as anti-Jewish bigotry becomes increasingly more commonplace.”

Congressman Ritchie Torres opened the door to the discussion when he stated that “scapegoating is a common symptom of antisemitism, which at its core is conspiracy theory.”

Congressman Lee Zeldin of Long Island, New York and candidate for Governor blasted the map noting, “The sick and twisted lies being pushed by the Mapping Project are part of an antisemitic movement that must be identified, called out and crushed in all forms.”

So where are the purveyors of truth and justice in mainstream media on this subject matter? Where is moral outrage? The irony of the question posed is the fact that media outlets are accused of being part to the alleged sinister plot outlined by the “Mapping Project.”

Even more curious is the silence from the White House on the matter. I would recommend to “foggy bottom,” otherwise known as the US State Department, the press statement from Israeli Foreign Ministry Spokesperson Lior Haiat. “Israel strongly condemns BDS Boston’s publication of a map of local Jews and it’s blaming them for anything and everything wrong in Greater Boston. This publication reveals the true, ugly face of BDS Boston which is nothing but a conspiratorial antisemitic organization. We call on all decent people to come out against the publication, and to condemn the organization and those behind this racist campaign.”

The “Jew hatred” map is making its rounds on social media platforms and BDS outlets. Its about time we start to take “Jew hatred” more seriously and hold authorities, officials, and governments to account. Start listening and watching to what people say and what they do. Actions speak louder than words. Its time we, as Jews and Zionists, map out our future.

ABOUT THE AUTHOR
Michael “Scott” Cushing serves as Special Advisor to the Nassau County Executive on the Combating Antisemitism Task Force. He also serves on the Community Advisory Board of Northwell Long Island Jewish Hospital, Valley Stream, New York. Further, he is former Publisher and Editorial writer for the Gateway-Bulletin Newspapers. He served in senior staff positions for the New York State Assembly and New York State Senate for over twenty years. He is active in Israeli and Jewish affairs in Nassau County.