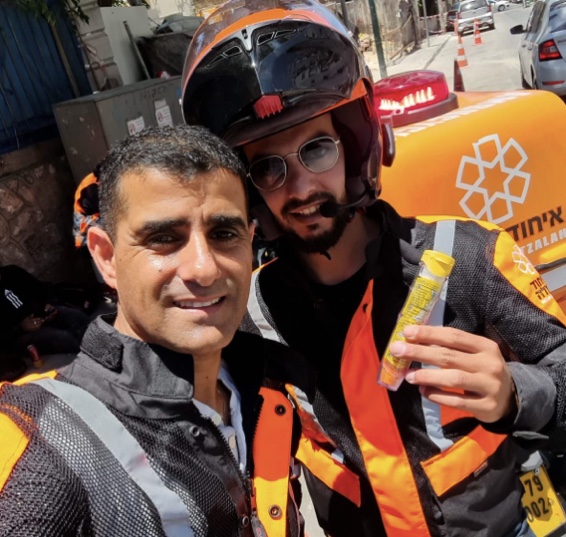 On Tuesday just after 11:00 a.m., a young girl in school in Tiberias suffered an anaphylactic reaction to milk products and went into shock. Staff members called emergency services for help.

Yair Nahum runs a designer balloon store located a few streets away. When he was alerted to the emergency, the United Hatzalah volunteer EMT apologized to the customers and told them that he would return shortly but first he was going to save a life.

When Yair arrived the girl’s limbs were beginning to turn blue and she had inflamed rashes all over her body. She was having difficulty breathing and her pulse was slow. Yair was told that she has an allergy to milk products and a dairy cake in the room had triggered a reaction. The EMT took out his EpiPen and administered the epinephrine (EpiPen) autoinjector. A few moments later the girl’s symptoms began to recede.

Less than an hour after the incident in Tiberias, another incident took place, this time near the Derech HaShalom interchange in Tel Aviv. A woman inadvertently ingested some dairy in her office. She had an anaphylactic reaction and people around her called emergency services.

Aharon Avital, a magician who was on his way to purchase supplies for a show, was riding his ambucycle and had just exited the highway when was alerted to the emergency. Arriving in less than 60 seconds Aharon ran to the woman in distress. Aharon pulled out his EpiPen and administered the dosage.

“The ambulance arrived fifteen minutes after I arrived,” explained Aharon. “Had it not been for the EpiPen, the woman would have been in danger. There is a massive shortage of these autoinjection devices around the globe but I believe that every first responder needs to have them at all times. It’s one of the most important lifesaving tools. I was worried that because I already used the EpiPen, I wouldn’t have one to give to the next patient I treat. However, not even 30 minutes after the incident, my team leader Ron Cohen drove out to meet me and replaced it. In his honor, and in honor of the organization, I am once again prepared to save lives in any situation.”