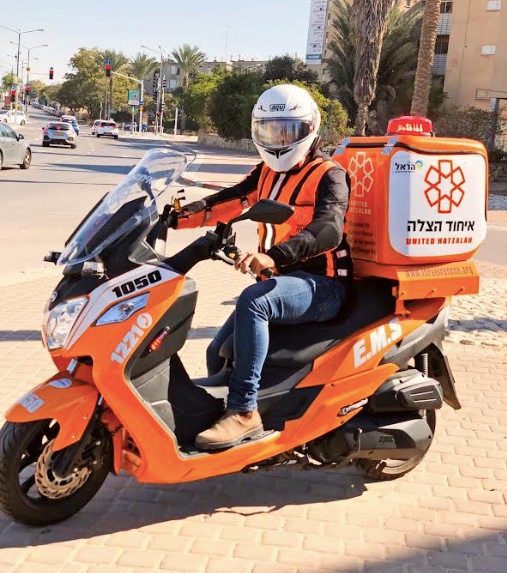 Be’er Sheva – Just after 12:00 p.m. on Monday, a man in his 70s was walking down Herzl Street in Be’er Sheva outside the Inspection Offices of City Hall when he suddenly collapsed. Worried passersby who saw the man collapse assumed that he had fainted. One worker from the Inspection Department called his coworker, Adir Nachmani, knowing that Adir is an Untied Hatzalah volunteer EMT. Adir was sitting in his office when he received the call from his co-worker. “Come quick, there is a man who collapsed right outside the building,” Adir’s co-worker told him.

Adir quickly grabbed his ambucycle helmet and jacket with his keys inside and ran down the street. He found the man lying on the sidewalk outside the building and raced to grab the medical kit and defibrillator from his ambucycle. He rushed to the man’s side and found bystanders lifting up the man’s legs, a proper protocol to compensate for a sudden drop in blood pressure. However, as Adir quickly assessed the man’s vital signs, he discovered that the man hadn’t simply fainted, but he had no pulse and wasn’t breathing. The man had suffered a cardiac arrest.

Adir instructed the bystanders to lower the man’s legs as he attached a defibrillator and launched into compressions. He then asked one of the people there to call United Hatzalah and ask for additional EMS personnel including a mobile intensive care ambulance to be sent to his location.

“I attached my defibrillator but it didn’t recommend a shock, this wasn’t a cardiac arrest due to a case of ventricular fibrillation (VF),” Adir recounted after the incident. “To my surprise, the man not only regained a pulse two minutes later just from compressions but by the time the ambulance arrived some five minutes later, the man began to breathe on his own once more and even started talking to me.” Adir asked him if he knew who and where he was and the man knew, signifying that he was fully conscious and aware of his surroundings.

The man thanked Adir for saving his life as he was loaded onto the ambulance. “I’ve been to my fair share of medical emergencies where CPR is required. I respond to a few each weekend. But to rush out of my own office to save a life downstairs in front of my building during work hours, just made me recognize once more just how important our work is. Having first responders spread throughout the country saves lives. Had I not been there today to initiate CPR as quickly as I did, this story would have had a different ending and it is possible that the man would not have survived. I feel blessed to be a part of this organization and I am happy that I was able to save this man’s life today.”