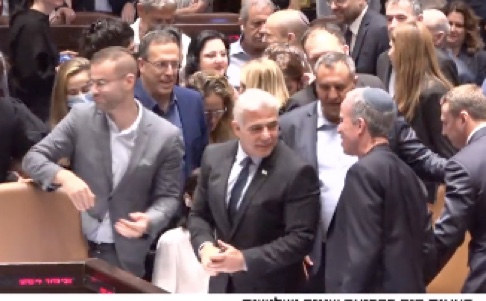 Israel’s parliament has voted to dissolve itself, officially sparking the country’s fifth election in less than four years.

Yair Lapid, currently foreign minister, will take control of the Knesset from Naftali Bennett – Israel’s shortest-serving prime minister – from just after midnight on Friday. Lapid will hold the post through the elections and until a new coalition is formed.

The motion to dissolve the Knesset passed with 92 in favor and none opposed, after days of disputes over a new election date. Israel will choose its new leader when the vote is held on November 1st.

i24NEWS Senior Correspondent @owenalterman reports from the Knesset in Jerusalem, with the latest statements of Israeli MKs @SharrenHaskel from New Hope party and @ShainYossi, from Israel Beteinu pic.twitter.com/E5tJFVyfkr

Immediately after the vote in the Knesset, incoming Prime Minister Yair Lapid went to @yadvashem and there he said:

“I promised my late father that I will always keep Israel strong and capable of defending itself and protecting its children.” pic.twitter.com/yCgWLgc1lP

BREAKING: The Knesset just voted 92 to 0 to initiate a November 1 election, Israel's 5th in 3 and a half years. Let the fun begin!

🇮🇱 — NEWS-VIDEO: The Knesset officially dissolved this morning after MKs voted 92 to 0 to initiate a November 1 election, Israel's 5th in 3 and a half years.