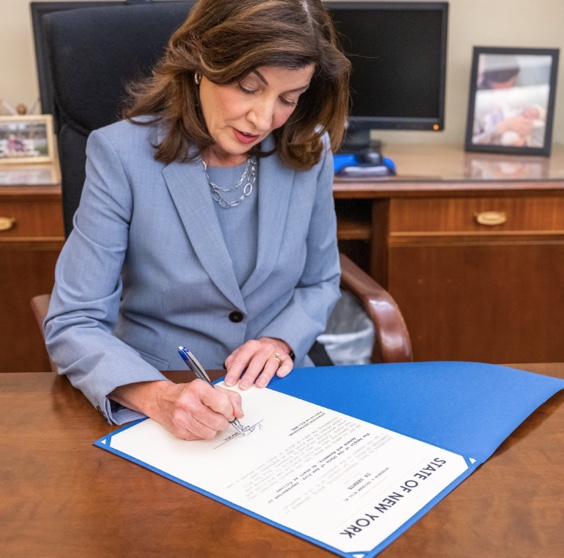 New York’s legislature approved a sweeping overhaul Friday of the state’s handgun licensing rules, seeking to preserve some limits on firearms after the Supreme Court ruled that most people have a right to carry a handgun for personal protection.

The measure, signed by Gov. Kathy Hochul after passing both chambers by wide margins, is almost sure to draw more legal challenges from gun rights advocates who say the state is still putting too many restrictions on who can get guns and where they can carry them.

Hochul, a Democrat, called the Democrat-controlled Legislature back to Albany to work on the law after last week’s high-court ruling overturning the state’s longstanding licensing restrictions.

I’m grateful to @GovKathyHochul for convening an extraordinary session to address gun safety.

We need every level of government and both sides of the aisle working to end the scourge of gun violence facing our country, especially after the Supreme Court’s reckless decision. https://t.co/bXwtzAUQkr

The anti 2A gun legislation passed today by Democrats in Albany & signed by Kathy Hochul will make New York LESS safe. The threat isn’t the law-abiding New Yorker who wants to safely and securely carry a firearm solely for self-defense. Go after the criminals instead!

.@NYCMayor this will not stop the gun violence. I debated the legislation & they admitted it does nothing to help stop illegal gun violence https://t.co/pakQwuj0iz

See a full description of the legislation from Governor Hochul’s press office below:

Governor Kathy Hochul today signed landmark legislation to strengthen New York’s gun laws and bolster restrictions on concealed carry weapons. This package of new laws — drafted in close collaboration with the Legislature — is devised to align with the Supreme Court’s recent decision in NYSRPA v. Bruen. As a result of this decision, the State has taken steps to address the consequences of the Supreme Court decision and the resulting increase in licenses and in the number of individuals who will likely purchase and carry weapons in New York State.

“A week ago, the Supreme Court issued a reckless decision removing century-old limitations on who is allowed to carry concealed weapons in our state — senselessly sending us backward and putting the safety of our residents in jeopardy,” Governor Hochul said. “Today, we are taking swift and bold action to protect New Yorkers. After a close review of the NYSRPA vs. Bruen decision and extensive discussions with constitutional and policy experts, advocates, and legislative partners, I am proud to sign this landmark legislative package that will strengthen our gun laws and bolster restrictions on concealed carry weapons. I want to thank Majority Leader Stewart-Cousins, Speaker Heastie, and all of our partners in the Legislature for their willingness to take on this critical issue with urgency and precision. I will continue to do everything in my power to combat the gun violence epidemic.”

“Keeping the people of New York State safe is our greatest priority and I am proud to stand with the Governor and Legislature in enacting the measures put into place today,” Lieutenant Governor Antonio Delgado said. “With this action, New York has sent a message to the rest of the country that we will not stand idly by and let the Supreme Court reverse years of sensible gun regulations.”

Research has shown that violent crime involving firearms increases by 29 percent when people are given the right to carry handguns, caused in part by a 35 percent increase in gun theft and a 13 percent decrease in the rate that police solved cases. Today’s legislative package furthers the State’s compelling interest in preventing death and injury by firearms by:

Allowing the state to regulate and standardize training for license applicants.

Restricting the carrying of concealed weapons in sensitive locations and establishing that private property owners must expressly allow a person to possess a firearm, rifle, or shotgun on their property. Individuals who carry concealed weapons in sensitive locations or in contravention of the authority of an owner of private property will face criminal penalties.

Strengthening and clarifying the law relating to the sale of body armor to include hard body armor, such as the type worn by the suspect in the Buffalo shooting and the safe storage of firearms.
The law will take effect on September 1, 2022. In addition, an appeals board will be created for those applicants whose license or renewal is denied or revoked, which will take effect on April 1, 2023.

Senate Majority Leader Andrea Stewart-Cousins said, “In response to the Supreme Court’s decision implying that guns are more important than lives in this country, we are passing legislation to ensure that New York State has safe and responsible gun laws. States are the last line of defense, which is why we are stepping up to protect New York from being easily flooded with concealed weapons and keeping firearms out of the wrong hands. These measures, in addition to the previous anti-gun violence legislation we passed, are vital in a time when there are more guns than people in America. New York will continue to prioritize people’s safety and lives, and I thank my conference, Speaker Heastie, and Governor Hochul for their partnership.”

Speaker Carl Heastie said, “In the wake of the Supreme Court’s dismantling our more than 100-year-old sensible concealed carry law, the Assembly Majority worked tirelessly alongside our Senate colleagues and the governor to ensure that our state has the strongest gun laws possible. We will not let this ruling make our streets less safe. Here in New York, the right to feel safe in public spaces is not secondary to unfettered access to firearms. And when this right-wing conservative court inevitably continues its assault on our democracy, we will remain as committed as ever to protecting the rights of every New Yorker.”

Last week, the Supreme Court’s 6-3 decision ended a 100-year legal precedent requiring individuals to demonstrate “proper cause” to obtain a license to carry a concealed firearm. The existing law gave discretion to the state and its licensing officers in determining what constitutes “proper cause”, which the court cited as unconstitutional. Governor Hochul has worked closely with the legislature to devise the following Legislation (S.51001/ A.41001), which carefully and strictly regulate concealed carry weapons while staying within the confines of the NYSRPA vs. Bruen decision.

The law also makes ‘no carry’ the default for private property, unless deemed permissible by property owners. This gives power to business and property owners to decide whether or not they want guns in their establishments, which could include bars, restaurants, shops or grocery stores. Property owners who do decide to allow concealed carry will have to disclose with signage saying concealed carry is allowed on the premises. This allows people to make an informed decision on whether or not they want to be in a space where people could potentially be carrying a weapon.

The legislation allows the state to conduct and have oversight over background checks for firearms and run regular checks on license holders for criminal convictions. State background checks will go beyond those conducted by the National Instant Criminal Background Check System maintained by the FBI, which lack access to crucial state-owned and local-owned records and databases that provide a more accurate assessment of an applicant’s background. Research has found that states that perform their own background checks, instead of solely using the federal database, experience 27 percent lower firearm suicide rates and 22 percent lower firearm homicide rates. The legislation also requires background checks for ammunition sales and creates a statewide license and ammunition database.

Under current law, a “body vest” has a limited defined as a bullet-resistant soft body armor. This legislation will redefine body vests to encompass a broader array of protective equipment that is bullet resistant, expanding current purchase and sale prohibitions to include hard body armor. During the Buffalo tragedy, the shooter was wearing a steel-plated vest which would be captured under this new body armor definition.