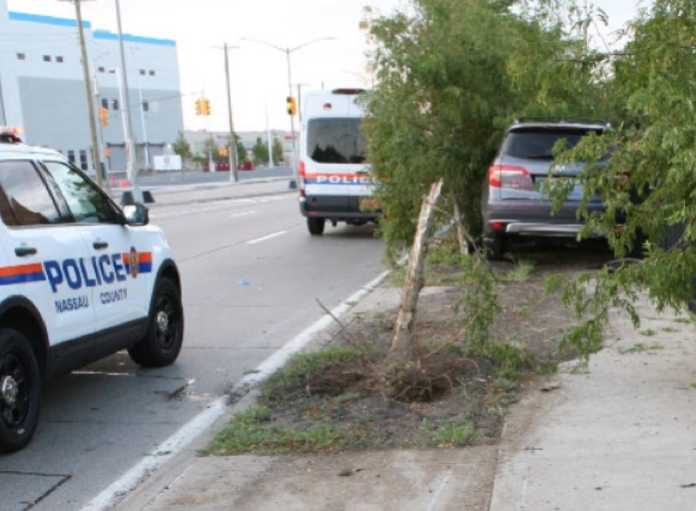 The Fourth Squad reports the arrest of two individuals on Tuesday, July 26th, at 2:20 am in North Lawrence.

According to Detectives, Officers received a call for speeding cars near the Five Towns Shopping Center. Upon arrival, the vehicles were gone but Officers were notified of a serious vehicular accident down the road in the vicinity of 249-71 Rockaway Boulevard where a vehicle had struck a tree. As Officers arrived on scene they observed multiple male suspects attempt to flee the scene but were able to place two individuals under arrest without incident. The investigation revealed the vehicle that struck the tree was an unoccupied stolen Honda Pilot. Located inside the vehicle on the floorboard of the driver’s side was what appeared to be a black handgun. Subsequent to the investigation the black handgun was determined to be a BB gun.

Arrested at the scene was a 22-year-old male from Far Rockaway and a male juvenile, 17, of Springfield Gardens. The defendants are each charged with Criminal Possession of Stolen Property 3rd Degree and Unlawful Use of a Vehicle 3rd Degree. Defendant Julius Mosley will be arraigned on Wednesday, July 27, 2022 in First District Court 99 Main Street Hempstead and the Juvenile Defendant will be in the Youth Part of First District Court.

911 call for speeding cars, police recover one stolen and second fled. 4th pct locate car, two bad guys attempt to flee, my cops are quick, two under. Both cars stolen one as an armed car jacking, from NYC, Gun is BB gun but you tell me if real or not! Nice job 4th pct. pic.twitter.com/WZqXM0t5AD