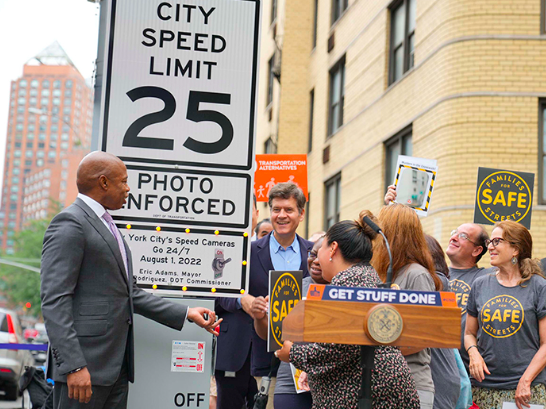 “Traffic safety is public safety, and today marks the start of a new chapter for traffic safety in our city,” said Mayor Adams. “This is a promise made and promise kept: Together with Deputy Mayor Joshi, Commissioner Rodriguez, and advocates, we fought to get this done in Albany. We must ensure that everyone can share the street space safely, and 24/7 speed cameras will protect our city and save lives.”

“Speeding kills. With cameras on 24/7, New York City gains an important lifesaving tool against this reality,” said Deputy Mayor for Operations Meera Joshi. “On behalf of all road users, I want to extend deep gratitude for all those who fought tirelessly for this important advancement in roadway safety.”

“We know speed cameras save lives, and, starting tonight, we expect to save even more of them,” said DOT Commissioner Ydanis Rodriguez. “We offer special thanks to the advocates who made today happen, especially Families for Safe Streets, who have turned their pain into purpose.”

The expansion of the speed camera program marks another major action of the Adams administration to keep New York City’s streets safe. Already this year, Mayor Adams has made a historic commitment to invest more than $900 million in critical street safety initiatives; laid out a plan to redesign 1,000 intersections across the city to protect pedestrians, cyclists, and drivers; and launched a $4 million campaign targeting speeding and reckless driving.

“The NYPD is committed to driving down fatalities,” said NYPD Chief of Transportation Kim Royster. “Extending the hours of speed cameras in our communities is another layer of enforcement that will hold reckless drivers accountable and protect our most vulnerable road users. We support this technology and will work with our Vision Zero partners to educate the public. The message is clear: Slow down. Everyone should drive safely because traffic safety is public safety.”

“The Sheriff’s Department understands the urgency to take corrective action,” said New York City Sheriff Anthony Miranda. “We will continue to identify these violators and hold them accountable for endangering our community.”

“Speed cameras are a critical component for reducing traffic-related injury and death,” said New York City Department of Health and Mental Hygiene Commissioner Dr. Ashwin Vasan. “This expansion will have profound benefits for the health and safety of New Yorkers. Reducing speeds on our roads will not only save lives, but it will also spare us from preventable loss and trauma that results from traffic crashes. Thank you to the mayor and DOT for this pivotal contribution to public safety and public health.”

“Speed cameras are an essential tool to keep all New Yorkers, from pedestrians and cyclists to TLC-licensed drivers and passengers, safe from traffic violence – but they can’t be effective when they’re turned off,” said TLC Commissioner and Chair David Do. “We are grateful to our government and advocate partners for helping to expand the city’s speed camera program and ensuring that road users are protected from reckless drivers regardless of the time of day.”

“Today marks a huge victory for Vision Zero and promotes safe driving, increased accountability, and heightened focus,” said DCAS Commissioner Dawn M. Pinnock. “With the activation of speed cameras 24/7, 365 days a year, our streets will be safer, we’ll reduce traffic incidents, and we’ll save lives. As a Vision Zero Task Force member, we believe in setting safety standards that improve quality of life and protect all New Yorkers.”

“Nobody should experience the pain of losing a loved one to traffic violence,” said Monique Williams, member, Families for Safe Streets, whose father was killed by a hit and run driver in the Bronx in 2021. “Unfortunately, these deadly crashes are spiking in the Bronx, where fatalities are up 50 percent over last year. We need to expand the Vision Zero tools that work, and that is why we are thrilled to see our speed safety cameras turning on 24/7 starting tonight. With this change, we will prevent reckless driving, make streets safer, and save lives every hour of every day.”

“For more than 65,000 Deliveristas, their offices are on New York City streets,” said Hildalyn Colon Hernandez, director of public policy and strategic partnerships, Los Deliveristas Unidos (LDU), Worker’s Justice Project. “For more than two years, Los Deliveristas Unidos organizing brought the workers’ perspective into the discussion on how we can work together to keep our streets safe. For Deliveristas, this announcement is significant as just in the last weeks, we have lost four Deliveristas in New York City streets. Los Deliveristas Unidos know that cameras lead to safer roads, but, more importantly, speed cameras and automated traffic enforcement must use them to bring accountability to unscrupulous drivers that harm New Yorkers. LDU will continue to partner with Mayor Adams’ administration and transportation advocates to better the infrastructure as Deliveristas bring their perspectives and propose innovative solutions to these problems.”

“Speed safety cameras save lives. Starting tonight, New York City will finally be able to use this essential tool to make streets safer 24/7/365,” said Danny Harris, executive director, Transportation Alternatives. “We thank Assemblymember Glick, Senator Gounardes, Commissioner Rodriguez, Deputy Mayor Joshi, Governor Hochul, and Mayor Adams for working together to strengthen this much-needed Vision Zero tool this year. We look forward to working with the Adams administration further to expand lifesaving programs like automated enforcement and street redesigns to ensure no one needs to fear death or injury when crossing the street in New York City.”

“New York City’s streets will be measurably safer when speed cameras begin operating around the clock on August 1st,” said Eric McClure, executive director, StreetsPAC. “Speed cameras are proven to reduce speeding, and less speeding means fewer crashes. We’re grateful to Mayor Adams and Governor Hochul for their support of the speed-camera program and for the steadfast efforts of State Senator Andrew Gounardes and Assemblymember Deborah Glick to pass their bill allowing 24/7 operation of speed cameras. We and many other advocates – most notably Families for Safe Streets and Transportation Alternatives – have been working toward this day for several years, and we’re ecstatic to see this effort come to fruition.”

“We applaud Governor Hochul, Mayor Adams, and the state Legislature,” said Felicia Park-Rogers, director of regional infrastructure, Tri-State Transportation. “The speed enforcement cameras will save lives, especially for our city’s most vulnerable street users such as seniors, children, and the disabled. This is another step as our city works to achieve Vision Zero.”

“This is a major victory for New York City,” said Sara Lind, director of policy, Open Plans. “Speed cameras and automated enforcement are powerful preventive tools; they reduce dangerous driving and deadly crashes, and they keep everyone safer. With traffic violence at an all-time high, we need these cameras operating 24/7. This is a common-sense investment toward prioritizing life and safety for pedestrians, cyclists, and drivers.”