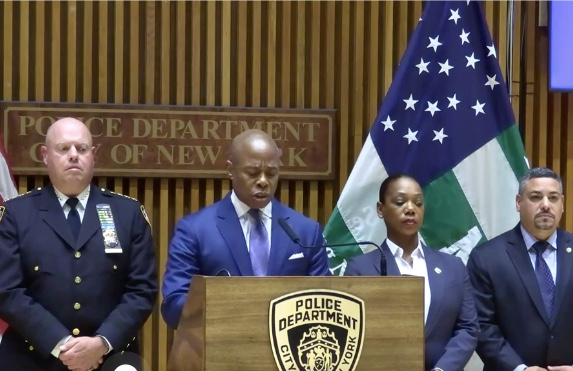 New York City Mayor Eric Adams and police department heads slammed the state’s bail reform laws as “insane” and “dangerous” amid an increase in arrests and a series of high-profile attacks on law enforcement and the public.

New York Police Department Commissioner Keechant Sewell joined Adams and other NYPD officials for a press conference Wednesday at NYPD headquarters, where she spoke of “the challenges we are facing in New York City every day.”

"Our criminal justice system is insane." @NYCMayor, @GovKathyHochul disagree on the state of bail reform..as the Mayor and the NYPD release new details on the city's "worst-of-the-worst" repeat offenders, and the impact they are having on public safety. @News12LI #AlertCenter pic.twitter.com/0W8iutJsRE

Mayor Adams and Police Commissioner Sewell Wednesday released new data highlighting the increase in recidivism in New York. They released a list of the top ten recidivists in the city and called for changes to stop rampant recidivism, erase the perception among criminals that there are no meaningful consequences for crime, and restore government’s focus on the victims of crime and disorder.

In addition to other reforms, the Mayor and the Police Commissioner believe judges must be allowed to remand defendants at arraignment when they are deemed a risk to public safety based on the severity of their alleged crimes or their history of recidivism. New York State is now the only state in the country where a judge is barred from considering the danger an offender poses when deciding whether or not to set bail.

“The hardworking women and men of the NYPD are doing the work, but the overall system is failing New Yorkers by allowing repeat offenders back out on the streets over and over again,” said Mayor Adams. “Time and time again, our police officers arrest someone who has multiple charges, but no matter how many times this person may have been arrested before, they are often walking free hours later. There is almost no accountability, and that makes us all less safe. I fought against abuses in the criminal justice system as an officer and as founder of 100 Black Men in Law Enforcement, and I know it is possible to keep New Yorkers safe, while serving justice at the same time. We need targeted, strategic, smart fixes to our laws that focus on the small number of people that are driving crime — the few hundred serial offenders in custody who are taking advantage of the system and exploiting reforms every day. We must stop this revolving door of injustice.”

“Let’s be clear: Nonviolent, first-time offenders deserve a second chance, as the spirit of the state’s 2020 criminal justice reforms envisioned,” said Police Commissioner Sewell. “However, judges should be given the ability to hold career and violent criminals in custody pending trial. We need to maintain the reforms we all agree on – yet at the same time, pull together to keep New Yorkers from being harmed. Our collective focus must be on the victims of crime.”

Nonetheless, with a reduced headcount, and a streamlined overall budget, police officer productivity is on the rise.

So far, in calendar 2022, overall arrests by police officers have increased by 24% compared with the same period a year ago. More specifically, arrests for the seven major felony crimes are up by approximately 29% compared with the same period in 2021. Firearms arrests are at a 27-year high, as the NYPD has taken more than 4,300 guns off the streets through the end of July.

Officers of the NYPD are working around the clock, giving their all to help make New York safe – and the city this year is safer: The numbers of murders and shootings are both on the decline through the first seven months of the year, compared to the same period in 2021.

Yet, for many of the most serious criminals, the city’s criminal justice system has created a revolving-door of no-consequences for wrongdoing that is allowing them right back onto the streets to prey on innocent victims. Today, nearly 25% of those arrested for burglary go on to commit another felony within 60 days, a sharp increase compared with 2017, when 8% of accused burglars were arrested for another felony within 60 days. Analyses for the offenses of Grand Larceny, Grand Larceny Auto, and Petit Larceny, show nearly identical increases for 2021 compared with 2017. And, those recidivism rates for those crimes have not improved in calendar 2022.

This “no consequences” landscape must end.

To understand the damaging effect on the city, consider the list, below, representing notable, recent recidivists who have repeatedly victimized New Yorkers. For individuals with criminal histories for reoffending, as well as for criminals who commit severe or violent crimes, judges must be provided the discretion to discern the best method of ensuring that they do not victimize more New Yorkers and make our communities less safe.

These worst-of-the-worst recidivists include:

The NYPD has long championed reform – to reflect what a majority of New Yorkers have expressed as their desire for effective and fair law enforcement. But these trends are alarming and indisputable. We cannot continue to allow a limited number of dangerous recidivists to exploit current bail laws to repeatedly victimize innocent New Yorkers. Together, all forces of government must pull together to fix the laws, return our system to pre-pandemic functionality, and continue to make our city and its people safer.