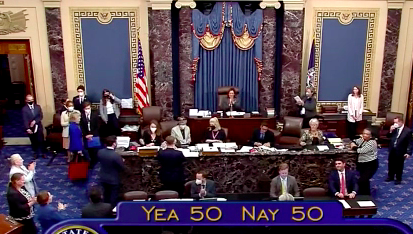 The “Inflation Reduction Act of 2022” is far less ambitious than most Democrats wanted — the initial bill was roughly $3.5 trillion and also addressed paid family leave, funding for universal preschool, and expanding the child tax credit.

But the narrower version bill succeeded in getting the support of the Senate’s two centrist members who had previously stood in the party’s way — Sens. Joe Manchin (D-W.V.) and Kyrsten Sinema (D-Ariz.). The package now moves to the House, where members will vote as early as Friday on advancing the bill to President Biden’s desk.

Read below the statement of President Biden, following the approval:

Today, Senate Democrats sided with American families over special interests, voting to lower the cost of prescription drugs, health insurance, and everyday energy costs and reduce the deficit, while making the wealthiest corporations finally pay their fair share. I ran for President promising to make government work for working families again, and that is what this bill does — period.

This bill caps seniors’ out of pocket spending for prescription drugs at $2000 per year – no matter what their drug bills would otherwise be, seniors will not have to spend more than $2000. In addition, 13 million Americans, covered under the Affordable Care Act, will see their health insurance premiums reduced by $800.

This bill tackles inflation by lowering the deficit and lowering costs for regular families.

This bill also makes the largest investment ever in combatting the existential crisis of climate change. It addresses the climate crisis and strengthens our energy security, creating jobs manufacturing solar panels, wind turbines, and electric vehicles in America with American workers. It lowers families’ energy costs by hundreds of dollars each year.

Finally, it pays for all this by establishing a minimum corporate tax so that our richest corporations start to pay their fair share. It does not raise taxes on those making under $400,000 a year – not one cent.

I want to thank Leader Schumer and every member of the Senate Democratic caucus for supporting this bill. It required many compromises. Doing important things almost always does.

The House should pass this as soon as possible and I look forward to signing it into law.