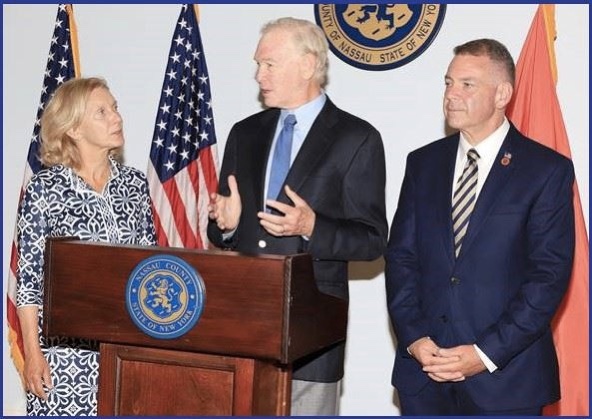 The Nassau County Legislature declared that End Jew Hatred Day will be recognized annually, on April 29.

End Jew Hated Day acknowledges the need to act against Jew-hatred across the country. In Nassau County, there has been a rise in attacks against the Jewish community, including flyers filled with hate messages being distributed recently in Rockville Centre, Long Beach and Oceanside.

“We are thankful to Nassau County for recognizing the importance of standing up against Jew-hatred,” Brooke Goldstein, founder and executive director of The Lawfare Project, said. “This annual day of recognition shows the strength of the Jewish people and our allies. It is no longer acceptable to stand idly by as a minority group is openly discriminated against, week-in and week-out.

“This Jewish civil rights movement marks the start of a wider initiative to spread awareness about, and fight, the rise in Jew-hatred across the country.”

The Nassau County proclamation, issued on June 28, recognizes the need for speaking out and taking action against Jew-hatred.

“We must unite on ending Jew-hatred, and thus, make progress towards being a more inclusive, safe society,” County Executive Bruce Blakeman’s official proclamation reads. “Hate crimes have increased drastically in the past several years, demonstrating that we must be vigilant against the growing threat of anti-Semitism.”

The Holocaust Museum & Center for Tolerance and Education is mentioned in the proclamation, expressing a commitment “to making our communities safer and more inclusive for all people.”

#EndJewHatred is a grassroots movement that unites ordinary people, activists, and organizations from around the world who support the cause that defines the movement: to end Jew-hatred in our lifetime. It does so by altering public discourse to make Jew-hatred unacceptable in society, while empowering Jews with positivity and strength to discover and enjoy their heritage in whichever manner they choose, without fear of attack or persecution.