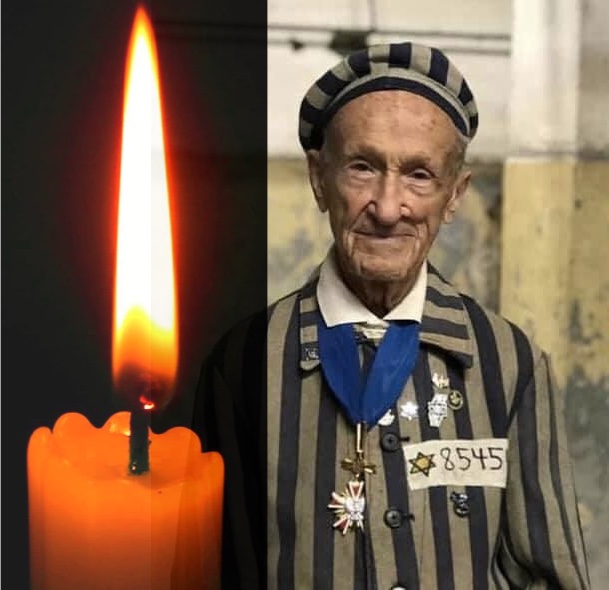 Holocaust survivor Edward Mosberg A”H passed away on Wednesday in New Jersey, at the age of 96. He devoted his life towards educating the public about the Holocaust and traveled the world, even in his later years, to tell his story.

Mosberg was born in Krakow and survived the Krakow ghetto, Plaszow and Mathausen concentration camps, and slave labor at the Hermann-Goering factory. His entire family was murdered in the Holocaust.

Having long shared his memories of the Holocaust as a public speaker, Mosberg remained determined to find a lasting audience through the Visual History Archive, and he was finally able to record his testimony in October 2016.

As the sole member of his family to survive, Mosberg always felt a duty to speak on behalf of their long-stilled voices. “My two sisters, and my wife’s sister, were killed in Stutthof on the night before liberation,” he recalled. “We must never forgive and we must never forget. I lost my whole family. So this is my duty, to go and talk and talk. Not just because of my family but also the 6 million Jews who were murdered. I go to schools, any place they need me, I am available. As long as I will live, to my last day I will go and talk about it, so the Holocaust will not be forgotten.”

“The United Nations declared January 27 as Holocaust Remembrance Day,” he once told over. “For me, it is every single day.”

“Steven Spielberg woke up the whole world,” Mosberg said. “He is the greatest hero because up to that point people tried to forget. He brought the whole world to know about the Holocaust.” The work goes on, he said, with Smith and the mission of USC Shoah Foundation which he proudly supports.

The video below was from a trip just six months ago on ‘March of the Living’:

Mr. Edward Mosberg passed away tonight, the most wonderful man I have ever met.

He was a Holocaust Survivor, noble man and a great Polish patriot, full of energy to the very end of his 96 years of life. My personal mentor. Irreplaceable.

Please pray for him and his family. pic.twitter.com/DfiXapBwMw

Deeply saddened to hear that Ed Mosberg, has passed away, aged 96. Mosberg survived the most unimaginable evil of Auschwitz & Mauthausen and became indefatigable in combating antisemitism and promoting Holocaust education. His greatest victory though was his family! BDE pic.twitter.com/AAk5rfBkAy

He was a Holocaust witness who testified the truth, Holocaust survivor who cherished life, and Holocaust educator who taught the world about Shoah. He was a Polish Jew who brought Poles and Jews together.

Mr. Mosberg passed away at 96.