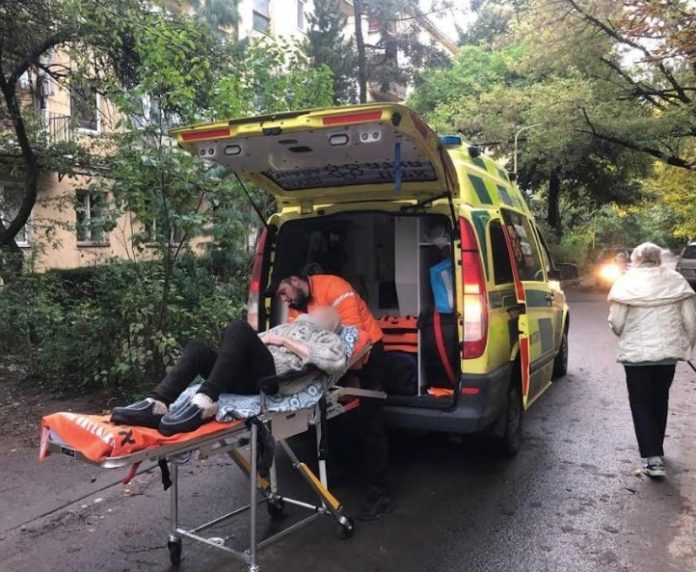 Lyman, Ukraine – A few days before Yom Kippur, Naftali Rabinovitch, who serves as United Hatzalah Chief of Operations in Ukraine, received an urgent phone call. The woman on the other end of the phone said that she is the granddaughter of an older woman who lives in the city of Lyman and that her grandmother was in need of urgent medical attention and transportation out of Lyman.

The city of Lyman, located in the province of Donetsk has been a flashpoint in the war between Ukraine and Russia recently and has come under heavy fire as both sides struggle for control of the province which was seized by Russian-backed militants in 2014. Donetsk, together with the Luhansk province makes up the region called Donbas and Russia has stated that they recently annexed the region in spite of taking heavy losses in the conflict.

Lyman was retaken by Ukrainian forces over the weekend making an extraction in the city by a Ukrainian ambulance now possible. Being uncertain how long the city would stay in Ukrainian hands, Naftali saw the window of opportunity and raced for it. He immediately dispatched a pair of ambulance drivers who work with United Hatzalah in Ukraine, Alexander Valerovitz and Vadim Aniboritzog on a mission that resulted in the grandmother’s life being saved and her being returned to her only other family currently inside Ukraine in the western city of Uzhgorod. The distance the pair would have to travel was more than 2,500 kilometers (1,550 miles).

Alexander and Vadim departed on Sunday morning and traveled through the country and into Donetsk, they alternated driving, often coming under fire, until they arrived in Lyman. They found the grandmother, an 86-year-old Holocaust survivor, in a severely damaged house that had been hit by rocket fire recently. The woman had a long list of previous medical conditions, but her current concern was that she was unable to use one of her hands, as she had been injured when her house was shelled. There are no hospitals currently open in Lyman or the surrounding area, so the woman was still waiting for treatment. The pair provided initial treatment and then evacuated the woman, bringing her all the way to the western city of Uzhgorod, which sits on the Slovakian border. They arrived safely on Tuesday morning and the woman was taken to a hospital where she received treatment and was reunited with her family.

“Uzhgorod is probably the furthest city away from Donetsk and thus, one of the safest in the country currently,” Naftali explained after the mission was a success. “We wanted this woman to feel safe. Additionally, she requested to be taken there because that is where her family is located. We brought her to a medical facility in order to receive care and it was there that she was reunited with her family.”

Naftali added, “Alexander and Vadim risked their lives to save this woman. They came under fire both while traveling to Lyman and upon making the return trip. I was monitoring every step of the way and there were some very scary moments for the team. It was a risk, but to save the life of a woman who has already suffered so much, and who lived in an area where no other help was able to reach her, we all felt that it was our duty to undertake this mission. I am very proud of the United Hatzalah team here in Ukraine for pulling this off and I want to thank both Alexander and Vadim for their heroism and their dedication to saving lives.”