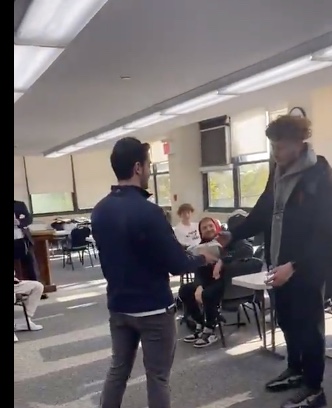 Mi K’amcha Yisroel: Roy is a young man on YU’s basketball team. While on the team, Roy began learning more about Judaism from his friends and yearned for more.

Zevi Samet, the new star on the YU Macs, discovered that Roy wanted to put on Tefillin during their daily “chavrusa shaft” of learning the sefer Olam Hamiddos. “He’s been growing on and off the court”, Zevi remarked.

The ‘Tefillin Project’ started by Jacob Bach and operated by Jack Margolius gives out free pairs of Tefillin to students who are committed to wearing them. Zevi got in touch with them after he realized Roy wanted to wear.

Watch the moment when Roy received his very first pair of Tefillin from his friends.