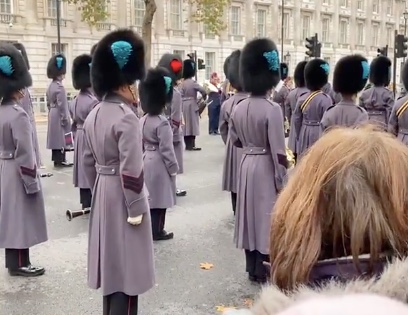 In honor of Chief Rabbi Mirvis’s visit, along with a large group of Holocaust survivors, the military band played several Jewish songs for the occasion.

The Cenotaph is a historic war memorial on Whitehall in London, England. The Chief Rabbi was in London officiating at the AJEX Parade.

AJEX is an organization that honors the Jewish contribution to Britain and HM Armed Forces, ensuring remembrance of the sacrifices of the past and supporting veterans in the present.

Watch the military band below playing “Moshiach” at the parade, video via Rabbi Mordechai Lightstone.

"Moshiach" is played outside of Buckingham Palace. pic.twitter.com/WNCpzlAUAc

See more photos from the parade below.

“May the Lord bless you and keep you.” The Chief Rabbi officiating at today’s @AJEX_UK Parade. pic.twitter.com/ZJKkqTrLTq

“Thank you for being an enormous inspiration to me and many others”. The Chief Rabbi addressing the members of @AJEX_UK – The Association of Jewish Ex-servicemen and Women before today’s AJEX Parade. pic.twitter.com/g2XE0KZmeh

Just in case you spot yourself @eathummous1 in the @AJEX_UK memorial service.

Absolutely moving and poignant and I felt privileged to see it for the first time @linzi_pinto pic.twitter.com/53KwYJuwSU