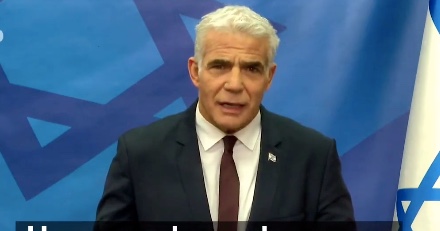 Prime Minister Yair Lapid, today made the following statement on the security situation in Israel:

“I would first like to send my condolences and the condolences of the Government of Israel to the family of Aryeh Shechopek, of blessed memory. He was a boy who never wronged anyone in the world, and he was murdered simply because he was Jewish. I also wish a speedy and full recovery to the wounded.

I just concluded a broad situation assessment with the Minister of Defense, the Minister of Public Security, the IDF, the ISA and the Police on two serious incidents from the last day.

The first incident is the attack in Jerusalem. This event is different from what we have seen in recent years. An extensive intelligence effort is now underway that will lead us to find these heinous terrorists, those behind them, and those who provided them with weapons.

I want to say to the citizens of Israel: We will find them. They can run, they can hide — it won’t help them; the security forces will reach them. If they resist, they will be eliminated. If not, we will punish them to the fullest extent of the law.

In the situation assessment today, we ordered the reinforcement of forces in the Jerusalem area in the coming days, and to intensify our search in all the relevant areas. The IDF, the ISA and the Israel Police are deployed in the area at this very moment to ensure that there will be no further attacks.

The second event is the kidnapping of Tiran Pero – a young man who was supposed to celebrating his 18th birthday tomorrow – who was fatally injured in a car accident in Jenin. I spoke today with Tiran’s father. According to the family’s testimony, the kidnappers entered the hospital, disconnected a child who was fighting for his life from medical equipment, and kidnapped his body.

Israel has proven in recent months that there is no place and no terrorist that it does not know how to reach, from the Kasbah in Nablus, to the refugee camp in Jenin, and other fronts near and far. If Tiran’s body is not returned, the kidnappers will pay a heavy price.

The State of Israel has been dealing with terrorism since the day it was founded. Our enemies need to know that we stand united and strong against them. We are one nation that knows how to stand together against those who seek our demise.”