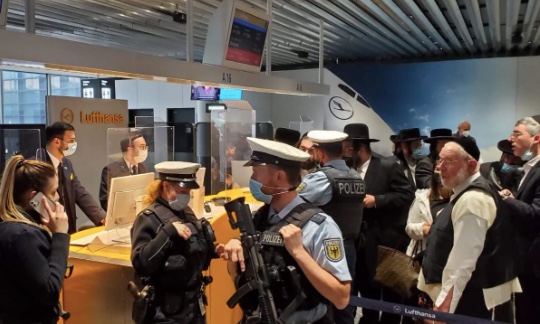 Most of the passengers who were collectively denied boarding on their connecting flight 1334 to Budapest after flying on Lufthansa flight 401 from JFK to Frankfurt earlier this year have come to a settlement with the airline.

Sources tell me that the airline has agreed to settle for $20,000 plus $1,000 to cover expenses related to the incident.

Roughly 128 passengers were denied boarding and 2 were allowed to board. If the airline paid out $21,000 to each of them, that would be an expense of about $2.7 million. However some passengers weren’t part of the settlement, for various reasons.

In the aftermath, Lufthansa and the AJC launched a joint initiative to combat global antisemitism. That included the airline endorsing the IHRA’s Working Definition of Antisemitism.

Are there any lessons to be learned from the disturbing incident?

Off the top of my head:

1. If you are visibly Jewish, you are under a magnifying glass at all times. Even if others are breaking the rules, you will be more noticeable and will be judged as a group for the way you dress. It may not be fair, but that’s life and we need to act accordingly. Wear the yarmulka and wear it proud, but know that it means we have to act beyond the letter of the law and others will expect us to as well.

2. Be your brother’s keeper. It might be uncomfortable, but gently remind them to please follow the rules, keep a closer watch on their children if they’re jumping on the tray tables, etc. That’s a tough ask, but try to do it in a way that will be effective.

During the uncomfortable scene at the Lufthansa boarding gate in Frankfurt, you can hear people getting visibly frustrated and losing their temper, but you can also hear people saying shrei nisht. You can be seething mad about a situation and demand that it be rectified without shouting and making yourself look bad in the process. And for the most part it worked. That gate situation was certainly calmer than could be expected during a stressful situation when 128 people are collectively denied boarding without any due process to identify the actual rulebreakers.

3. If you even think something is about to happen, start recording. Even if you think it’s too late, start recording anyway. Ideally, record surreptitiously without your phone right up in somebody’s face, so that it doesn’t become confrontational. Being discreet is especially important in foreign countries where video recording doesn’t have the same legal protections that we have in the US. It’s also good to learn how to recover photos and videos that you may be forced to delete from your phone, those typically can be recovered from folders for deleted files for a short period of time.

This story would have gone nowhere without video documentation of the “N-word” video, the cancellation announcements, and the shocking comments from the Lufthansa supervisor about all Jews being punished for the sins of a few.

4. Having the presence of mind to speak to a supervisor after the fact and to record it was brilliant. If you do decide to press employees for more information about a situation, be sure to record it. Even if you just point the camera at the floor, the audio will help, though obviously if you can hold your phone in your hand and point it up, it will be better.

If you are wronged while you travel, I’m always happy to help amplify it so that the airline makes things right, though not every story will make it into the New York Times or the Washington Post. Without video, it’s a he-said, she-said argument that won’t go anywhere, but if you have video, feel free to send it my way and I’d be happy to tell you my thoughts on the matter.

Rabbi Kalish: Handing The Beauty of Shabbos to Our Children