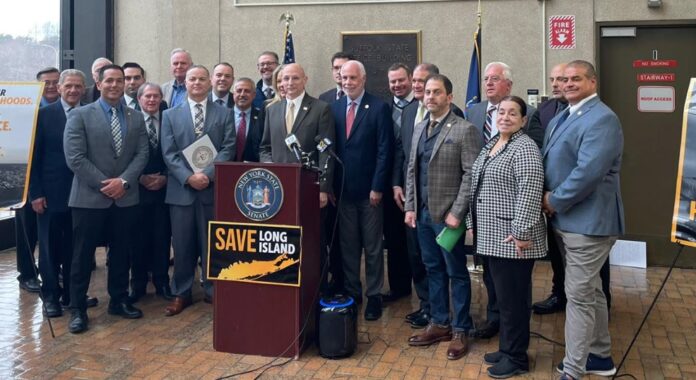 Assemblyman Ari Brown (R-Cedarhurst) joined Assembly and Senate colleagues and local elected officials at a press conference Friday at the Perry B. Duryea Jr. New York State Office Building in Hauppauge to oppose Gov. Hochul’s aggressive housing plan that would usurp local zoning laws in favor of building nearly one million new housing units in the suburbs across the state.

“I, along with my counterparts in more than 535 villages in New York state, 64 of which are on Long Island, believe in the importance of home rule when it comes to deciding what’s best for land use,” Brown said. “Smart and sensible zoning cannot be assessed and determined by a bureaucrat in Albany. That should always be decided by those elected to serve in the small community.”

Brown has served over four decades in the real estate, zoning, and planning industries. He is a former member of his village zoning board, and he currently serves as deputy mayor of the village of Cedarhurst.

“Gov. Hochul should back off from her aggressive housing plan, respect the data and listen to the suburbanites of her state, not from the city-centric ideologues who want to transform our ‘small town American’ communities into Manhattan,” Brown concluded.