Afula – Thursday afternoon in Afula, Alin Lea Blu, an employee in a local store, had an anaphylactic reaction after snacking on a dairy product. She started calling for help, shouting “I can’t breathe, I’m going to die”.

Michael Elharar, a volunteer EMT with United Hatzalah, was shopping in the store with his daughter when he heard Alin’s cries of despair. He approached her and asked her what she was feeling. The store employee responded that she had accidentally eaten a dairy product, to which she is allergic, and was now struggling to breathe.

Michael immediately understood that she was having an anaphylactic shock, a severe allergic reaction that can be easily treated through an injection of adrenaline but can become fatal very rapidly as it can cause the patient’s airways to become blocked by the swelling of their throat and tongue. A quick check-up confirmed the diagnosis. Alin’s tongue had already swollen, and she developed rashes on her skin. Additionally, she was suffering from shortness of breath, low blood pressure, and high pulse rate, all of which are symptoms of a severe allergic reaction.

Michael immediately updated United Hatzalah’s Command and Dispatch Center and took out an EpiPen, an adrenaline autoinjector, from his jacket. Hashem placed Michael right in the store with the remedy on hand. Even though he knew the injection procedure, the EMT called the regional paramedic to review the protocol and avoid any mistakes. He then carried out the injection. Within mere minutes, the swelling of Alin’s throat decreased. She reported feeling progressively better and being able to breathe normally once again.

Now joined by another United Hatzalah EMT, Michael waited with her for the arrival of the ambulance, as her condition continued to improve. Together with employees and customers in the store, the EMTs calmed and reassured Alin, who was still in shock from the situation. When the ambulance arrived a few minutes later they transported a now stable Alin to the hospital for further care and treatment.

“I work in Boom in Afula and I had a severe allergic reaction during my shift yesterday,” read the post which Alin wrote on a local Facebook group the next morning. “Two righteous people from United Hatzalah who happened to be in the store provided me with first aid until the ambulance arrived to take me to the hospital. There were other terrific shoppers who stood by my side and helped to calm me down. They didn’t leave me for a moment until I was in the ambulance. I’m looking for the customers as well as the two angels who saved me, if anyone was in the store and knows who they are please help me contact them so that I can thank each and every one of them.”,

After Michael was made aware of the post, he spoke with Alin in an emotional phone call. “Thank you for saving my life,” Alin exclaimed. “Words cannot express my gratitude for what you have done.”

“This story gave me a boost of motivation after a very difficult week,” Michael recounted after the incident. “I was at the scene where IDF officer Bar Falah was killed, and a day before the anaphylaxis incident I responded to a road traffic accident in which one of the drivers was critically injured. Cases like this one remind me of the difference I can make in someone’s life.”

Alin concurred, saying “I feel like I’ve received the gift of a new life. It was very important for me to show my gratitude to the EMTs who saved my life, as well as to the store employees and customers who stayed with me and calmed me down throughout the whole episode.”

Michael added: “The EpiPen is an amazing tool, but unfortunately, we do not have enough of them. A few hours after this incident I was alerted about another case of anaphylaxis near me, but I, unfortunately, didn’t have any more EpiPens on me. Thankfully, an ambulance was able to get to the patient on time, but it’s not always the case. Equipping all EMTs with EpiPens is critical to saving lives.” 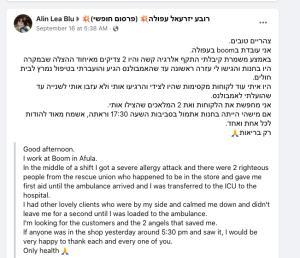