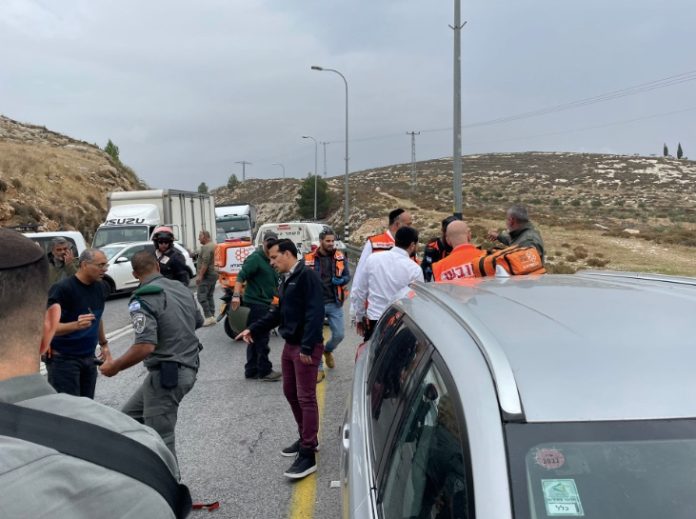 An Israeli woman in her 20’s has been seriously injured in a Palestinian car-ramming terror attack in the Sha’ar Binyamin area.

IDF forces located and shot the terrorist after he attempted to flee the scene. Thankfully, the terrorist died from his injuries.

The female soldier was seriously wounded and is currently undergoing surgery at a nearby Hospital. Please be Mispallel for her, we will add her Hebrew name when it becomes available to us.

Following the car-ramming incident United Hatzalah volunteer EMT Erez Shalom, who was the first responder at the scene relayed, “I was filling up my car at the gas station nearby when I saw the car that perpetrated the ramming in line behind me. At some point, the driver decided not to go into the gas station, pulled out, and drove into a woman standing nearby. He then drove away from the scene.

I alerted dispatch to what had happened and rushed over to the woman and began treating her for her injuries. She suffered a serious head injury as well as other injuries to her limbs and cuts and abrasions. Other volunteers arrived and assisted me in helping to stabilize her at the scene. When the ambulance arrived she was taken to Shaare Zedek Medical Center for treatment.”

Head of the Binyamin Region for United Hatzalah Menachem Leff added, “Due to the nature of the incident the Psychotrauma and Crisis Response Unit was dispatched to the scene and treated a number of other young women who witnessed the incident.”

May we hear Besuros Tovos.

An armed Israeli soldier was targeted in a ramming attack just outside Kochav Ya'kov settlement east of Ramallah.
A Palestinian driver (45) was reportedly shot and taken in an Israeli ambulance – his condition unconfirmed. pic.twitter.com/5igkp2m0EM