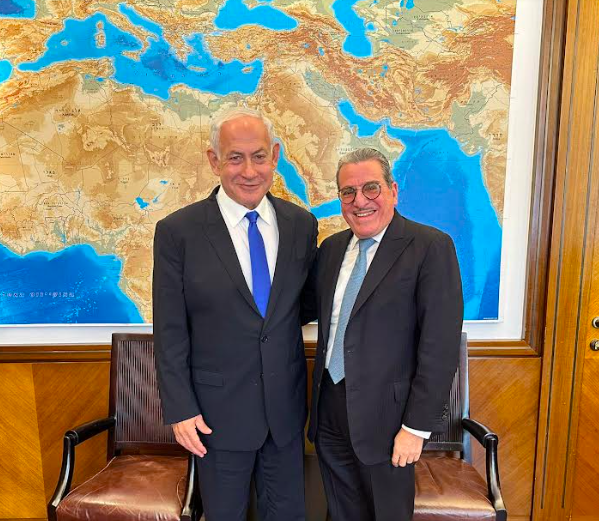 Veteran askan Shlomo Werdiger paid a whirlwind visit to Eretz Yisroel this past weekend to solidify ties between the United States’ Orthodox community and the new Israeli government, coming amid a series of protests by Israeli leftist groups against the center, right and religious parties that make up the coalition.

Mr. Werdiger, the chairman of Agudath Israel of America’s board of trustees, delivered the same message to the country’s president, prime minister and each of a dozen or so ministers — the Orthodox are more invested in Israel’s security and economic wellbeing than the Reform and other groups pressuring them to dismantle the religious status quo.

“I met just about every minister in the new government,” said Mr. Werdiger, the founder and CEO of the Outerstuff youth sports apparel company. “Every one of them was happy to see me — they see that I’m religious and that I’m normal.”

He said that the message was received very clearly, from his breakfast meeting on Sunday with President Yitzchak Herzog to his confab the next afternoon with Prime Minister Binyamin Netanyahu and his top lieutenants.

“If you think there’s a future for diaspora Jewry through the Reform movement,” he said he told them, “then you’re making a mistake. We love them and we fund programs to be mekarev their children, but we’re the ones who will ensure the future of Am Yisroel.”

The purpose of the trip was twofold — to acquaint the new government of the interest the global Orthodox Jewish community has in Israel and its chareidi community, and to lay the groundwork for the upcoming Am Echad delegation of Orthodox businessman and askanim.

“I came now because we now have a right-wing government who understands the importance of yishuv Eretz Yisroel,” he said. “We have to make sure that continues.”

Motti Babchyk, the housing and construction minister’s chief of staff, took Mr. Werdiger around for the five days he was in Eretz Yisroel.

“He accomplished a lot for the chareidi community,” Babchyk said. “Wherever he went he was greeted with respect. The ministers he met all said they would follow up on it.”

The weekend trip began Thursday with a visit to the foreign ministry for an encounter with Foreign Minister Eli Cohen. The two discussed how Agudah can be of help to Israel’s image and foreign affairs. Cohen reauthorized the Israel consul in New York and embassy in Washington DC to consider Agudah as an official organization to ally with. The connections had existed for many years but required the formality due to the new government being sworn in.

Cohen and Mr. Werdiger agreed that when the minister arrives in New York the next time he will visit Agudath Israel’s office in Midtown Manhattan.

Mr. Werdiger then met Rabbi Yitzchok Goldknopf, the new chairman of the Agudas Yisroel faction and the minister of housing and construction, as well as Agudah delegates from cities and towns across Eretz Yisroel. They discussed the high cost of housing in Israel and they agreed to discuss it further when the minister visits New York.

Following that was a meeting with Amichai Chikli, the diaspora affairs minister, during which he was joined by prominent American Dr. David Diamond and businessmen Hashi Herzka.

Mr. Werdiger praised Chikli for his strength in resisting the previous government. Despite his membership in Naftali Bennett’s Yamina party, Chikli voted against the coalition with Yesh Atid, the leftists and Arab parties.

Chikli, Mr. Werdiger said, was very interested in hearing, as part of his portfolio, how the American Jewish community fares.

The next day, Erev Shabbos, Mr. Werdiger met Nir Barkat, the minister of the economy. Barkat the former mayor of Yerushalayim, appeared impressed to hear that in New York, Orthodox Jews work in every industry and profession. Barkat declared his commitment to helping people from the chareidi community who want to work in various industries such as high tech do so.

Mr. Werdiger, who has a decades-long relationship with Netanyahu and Dermer, discussed how to counter the New York Times campaign against both the Orthodox community in New York and the new Israeli coalition. The Times has published more than a dozen articles vilifying the Orthodox community and yeshivas since September, and has long been a critic of right wing Israeli governments.

He then met privately with Aryeh Deri, who serves as both interior and health ministers, as well as vice prime minister who serves as acting premier in Netanyahu’s absence. Mr. Werdiger briefed him on the recent regulations enacted by the Board of Regents in New York state to extend its control for the first time over yeshivas and private schools.

The two men discussed several issues important to Israel’s chareidi community, such as the ability to manufacture a cellphone which is recognizably kosher, the Liba educational curriculum the state wants to impose on yeshivas, and the ever-present threat to draft talmidim of yeshivas.

“Agudah in the United States,” Mr. Weridger emphasized, “is an organization which unites all factions.”

Next on his agenda was Moshe Gafni, the head of the Degel Hatorah list who chairs the Knesset’s finance committee. Mr. Werdiger expressed his gratitude to Gafni that Agudah and Degel ultimately ran on a joint list. He added that the Torah community in the United States had been following the drama ahead of the election with concern and was glad that achdus prevailed.

Mr. Werdiger concluded with an invitation for Gafni to visit New York. Gafni, who has rarely left Eretz Yisroel, said he’d consider it.

Mr. Werdiger then headed over to National Security headquarters to meet Itamar Ben-Gvir, the head of the Otzma Yehudit party and a key target of leftist protests and world condemnation. Under the coalition agreement, Ben-Gvir has wide latitude over the police, as well as over building in Yehuda and Shomron.

Mr. Werdiger noted that he had come to meet him while the Reform groups trying to alter Israel’s religious status quo have announced a boycott of the minister.

“Ministers have to know who their real friends are,” he said he reminded him. “We have to change their perception of us; they have to give us a seat at the table.”

The next meeting was with Defense Minister Yoav Galant, who briefed him on the country’s security challenges, from the border with Lebanon up north to the Gaza envelope in the south. Mr. Werdiger discussed the yeshiva draft and the New York Times campaign against New York’s yeshivas.

Galant seemed attentive, Mr. Werdiger said, and was aware that the American Orthodox community was invested in the issue of bnei yeshiva.

Mr. Werdiger ended the day in Bnei Brak, where he met Chanoch Zeibart, the chairman of the Israeli Agudas Yisroel. The two discussed the recent success in the elections and the fruit it yielded through positions in the government.

He then headed to the home of Rav Gershon Edelstein, the rosh yeshiva of Ponovez and nasi of Degel Hatorah’s Moetzes Gedolei Hatorah. The rosh yeshiva bestowed his bracha for the American Agudah’s activities and reminded Mr. Werdiger of their last conversation prior to instructing Degel to run together with Agudah.

Monday morning saw Mr. Werdiger at the president’s official residence for breakfast with President Yitzchak Herzog. He requested that Herzog bring up with President Joe Biden the antisemitic atmosphere in New York, with Jews being beaten regularly and some media outlets falsely framing the community as riddled with fraud.

Next on the schedule was Finance Minister Betzalel Smotrich of the National Religious Party/ Smotrich promised to be an ally in all areas to the chareidi community, including raising the allowance kollel yungeleit receive. Despite the media onslaught against his and Ben-Gvir’s membership in the coalition, Smotrich assured Mr. Werdiger, “ha’am itanu — the nation is with us.”

Mr. Werdiger rounded out his trip with a meeting with Thomas Nides, the US ambassador to Israel, with whom he discussed the US-Israel relationship and the misinformation in the media regarding the Orthodox community.

“I don’t know what your perception of ultra-Orthodox is,” Mr. Werdiger told Nides, “but look at me — I’m ultra-Orthodox and I’m normal. We’re normal people.”

He later met with Meir Porush, the minister of Yerushalayim affairs. Porush noted the centrality Yerushalayim holds to Orthodox Jews everywhere, and particularly the Kosel, and that access to it must continue to adhere to an atmosphere of holiness.

Mr. Werdiger is confident that his trip accomplished the mission he set out for it and that Agudah — and the Orthodox community — will have a “seat at the table” when crucial decisions are hashed out.

“They received the message loud and clear,” Mr. Werdiger said about his journey. “Many of the ministers I met — their assistants contacted me that they want to follow up with me. They know that we have skin in the game.”