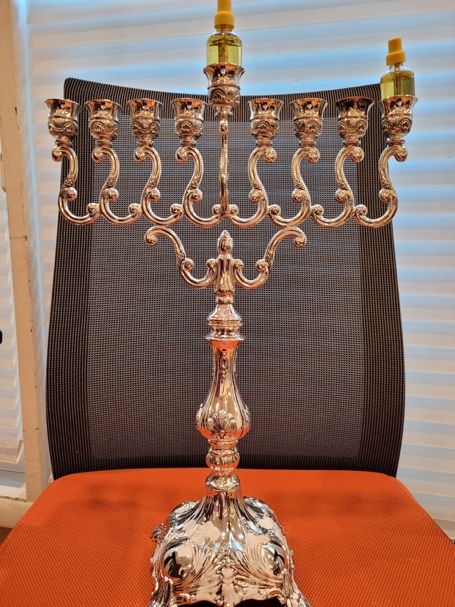 • Even though there’s no requirement to eat a special Seuda, there is a mitzvah to do so. If songs are sung then it will be considered a seudas mitzva.

• The minhag is that women don’t do work for a half hour after the candles are lit. The type of melacha to avoid is melacha that can’t be done on chol hamoed.

• If one is delayed in lighting the menora and wants to eat a meal, a shomer, who already lit, should be appointed to remind them to light. If there’s no shomer then an alarm should be set. Snacking on food is allowed even without a shomer. Women who are waiting for their husbands to light should preferably not eat a meal either.

When to light
• Daven Maariv before lighting candles unless you’re lighting before the proper time to daven Maariv. If you have a minyan later then daven marriv later

• If you can’t light at the above time, you can light all night with a Bracha.

• If there’s a choice between lighting before shkiah or lighting late into the night, lighting later is the better choice as long as someone’s awake (R’ Moshe Feinstein says that you don’t need to have anyone awake).

• You only light menora where you’re going to sleep. Therefore lighting at a Chanukah party doesn’t count.

• If you’re not going to be home at all that night then a shliach should be appointed to light for you.

• It’s better for you to light later in the night than to have a shliach light for you at the proper time.

• If your wife isn’t going to be home until late, it’s best to wait for her. Unless she really doesn’t care to be at the Menora lighting.

• After the menora is lit for a half hour after the proper time, it can be extinguished. However if you’re going to be home it’s better to stay lit for as long as possible.

Menorah placement
• Nowadays that we light inside many say that you should light in a doorway so that you can be surrounded by mitzvos. Others say that the window is better because there will be more presumei nes there. Chasidim usually do the former and litvish the latter.

• If no one on the street is going to see the menora then putting it in the doorway is definitely better.

• The requirement to light a menora is only if you have a house to sleep in. However ones who’s traveling in a car or plane etc. for the entire night can light a menora there or turn on a flashlight (not an LED bulb).

Traveling on Chanukah
• One who’s leaving the house that night to travel and won’t be sleeping home can still light the menora at home.

• One who is going to be eating and sleeping someplace can light the menora there and there’s no reason to light at home if no one is going to be home.

• If you slept away from home and the next day you’re still there at candle lighting time, you can light there. Even though you’ll be sleeping at home. However its better if you eat supper where you’re staying (very common on motzai shabbos).

• If one is away from home and sleeping in one house but eating in another, it’s preferred to light where eating. If necessary, lighting where sleeping is allowed.

• A yeshiva bachur who doesn’t eat or sleep at home but happens to be home at candle lighting time, can light at home.

Candlelighting
• Light from left to right. Stand to the left of the menorah and light the candle on the far left so that you don’t pass over any candles.

• If the candles go out they don’t need to be relit, even on Friday but it’s better to relight them.

• If the candles were never properly put in a place that they could’ve been lit well (wind) then they definitely have to be relit.

• If a candle goes out, don’t relight it from any of the other candles since according to the Halacha you don’t have to relight them, it’s taking from a flame of a mitzva to light something that’s not a mitzva. You can use the candles from the menora to light another persons Menora since they’re both mitzvos.

• Haneiros hallalu should be said after the first candle is lit while you’re lighting the other candles. If not then finish it afterwards.

• The mitzva of pirsumei nissa is only at the time of lighting not afterwards•When lighting the candles, the shamash should be left on the wick until most of the wick is burning because that’s considered a respectful way to light a candle.

• There should be a shamash lit next to the menorah even if there’s a light on in the room.

• Its preferable to have a light on in the room in addition to the shamash.

•Each menora should preferably have its own shamash.

• One should have in mind that the lighting of the menorah is in order to praise and thank Hashem for all the miracles that happened to us.

• Everyone in the household should gather at the menorah to see it being lit and to hear the brachos.

• The prevalent minhag is that women don’t light menorah unless they live alone.

Shabbos
• On Friday, it’s better to daven mincha before lightning the menorah•One should not daven without a minyan because of this Halacha.

• The menorah should be lit before the Shabbos candles.

•After one candle is lit, the Shabbos candles can then be lit and you don’t have to wait until all the candles of the menorah are lit.

• On motzai shabbos, either havdala or menorah can be done first.

Al Hanisim
• Al hanisim is said in shemona esrei and birchas hamazon but not in Al Hamichya.

• If it’s forgotten then they don’t need to be repeated.