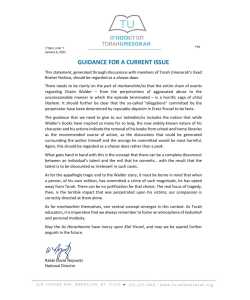 GUIDANCE FOR A CURRENT ISSUE

This statement, generated through discussions with members of Torah Umesorah’s Vaad Roshei Yeshiva, should be regarded as a chavas daas.

There needs to be clarity on the part of mechanchim/os that the entire chain of events regarding Chaim Walder – from the perpetrations of aggravated abuse to the unconscionable manner in which the episode terminated – is a horrific saga of chilul Hashem. It should further be clear that the so-called “allegations” committed by the perpetrator have been determined by reputable dayonim in Eretz Yisroel to be facts.

The guidance that we need to give to our talmidim/os includes the notion that while Walder’s books have inspired so many for so long, the now widely-known nature of his character and his actions indicate the removal of his books from school and home libraries as the recommended course of action, as the discussions that could be generated surrounding the author himself and the wrongs he committed would be most harmful.

Again, this should be regarded as a chavas daas rather than a psak.

What goes hand in hand with this is the concept that there can be a complete disconnect between an individual’s talent and the evil that he commits… with the result that the talent is to be discounted as irrelevant in such cases.

As for the appallingly tragic end to the Walder story, it must be borne in mind that when a person, of his own volition, has committed a crime of such magnitude, he has opted away from Torah. There can be no justification for that choice. The real focus of tragedy, then, is the terrible impact that was perpetrated upon his victims; our compassion is correctly directed at them alone.

As for mechanchim themselves, one central concept emerges in this context. As Torah educators, it is imperative that we always remember to foster an atmosphere of kedushah and personal modesty.

May the Av Horachamim have mercy upon Klal Yisroel, and may we be spared further anguish in the future.