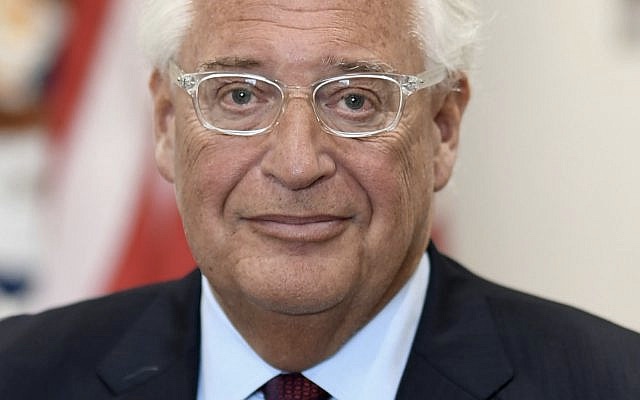 From the blog of Scott Cushing at Times of Israel

Ambassador David Friedman broke conventions. He challenged the status quo and forged new paths in the Middle East peace process that continue to bring promise of a brighter future for the United States and Israel. His tenure as Ambassador was marked by an approach that tore up the old rule book of diplomacy. Some opposed his direct manner and objectives. Most however, realized that his focus and quest for peace was not just a goal, it was a cornerstone of his faith. Recently, the Ambassador penned a bestseller titled “Sledgehammer.” The book is a fascinating read and sheds light on the tug and pull of diplomacy during very consequential events in recent history.

The Ambassador gives you a ringside seat to recent Middle East events. What he unveils in the pages of the book will no doubt raise an eyebrow of readers regarding beltway opinions and motives of some of our elected leaders.

As I read the Ambassador’s account I was struck by his style and manner of how he approached his job. He reminded me of his father.

Rabbi Morris Friedman was not just a congregational leader of a synagogue, he was a force of nature in the Jewish community. He was respected and carried a pride in being Jewish. In one of his last speeches at Temple Hillel, in North Woodmere, Long Island, he inspired a scared and unsure congregation on the night of 9/11. I was there. His words and power of their delivery that evening calmed a community grieving in the shadows of a terror attack. Rabbi Friedman had a spine of steel. He was direct and communicated clearly by using history, his love of the Jewish religion, and destiny.

Throughout Ambassador Friedman’s book, he outlines the challenges and hurdles that he faced to start discussions and find resolutions to the questions of peace. What strikes the reader from the onset is the fact that Friedman uses the foundation of his faith, rule of law and the simple and yet complicated art of communication to his advantage. Sound familiar?

He also employs a tactic and skill many politicians have difficulty with- the truth.

Friedman vividly illustrates a Senate confirmation process devoid of substantive discussion about the Middle East and Israel. In the lead up to the hearing, Friedman discusses his courtesy call visits to Senators. The meetings were uneventful and sometimes funny. Senator Sanders lived up to his reputation of being grumpy. Senators Booker and Gillibrand make the cut for outstanding hypocrites. Senator Ben Cardin was thoughtful.

The most disturbing interview was the conversation with Senator Chuck Schumer. After a pleasant meeting with the Senator replete with stories of New York and Israel, Schumer is asked by Friedman for his support. The Senator from New York who loves to talk about his faith and support of Israel simply smiled and said “sorry.” The reason was that he could not give President Trump a win. Progress took a back seat to politics for Senator Schumer.

The State Department was another arena that the Ambassador jousted with regularly. What you learn is that divisions within the Department are black holes in space where questions and proposed policy go to disappear. Other times, “advice” from Washington either made no sense or lacked true understanding, clarity or credibility when faced with the opportunities and realities on the ground. Not surprisingly, lawyers at the State Department do not provide legal advice but give politically correct answers whose basis in law was either dubious to begin with or developed with a political objective. The Jerusalem Embassy issue and Jerusalem Day celebrations were cases in point where Friedman stood his ground, challenged the status quo, and turned out to be right.

One such story in the book focuses readers on the process of moving the United States embassy to Jerusalem. Secretary of State Rex Tillerson was caught in an embarrassing slip up during his time discussing the issue with a working group chaired by the President. During the final meeting in the White House situation room, Tillerson stated that Jerusalem was captured by Israeli forces in 1996. History will show Jerusalem was captured in 1967. Ambassador Friedman was happy to point out that historical date. Once faced with the facts at other points during the meeting, Tillerson closed his notebook and announced that was all he had to say.

The approach to complicated and prominent issues revolving around Middle East politics and the United States are faced by Friedman, Secretary of State Mike Pompeo, and Jared Kushner in a can-do style. What you do not expect to learn about is the gross bias and incompetence by levels of government and the deterioration of mass media integrity on the very same issues.

You cannot help but ask yourself the question of: “are today’s government diplomats and legislators the best we have?” In glaring fashion, you see a bureaucracy of interests, political agendas and special interests jockeying over one another. In contrast, you see clearly that Friedman, Jared Kushner, Jason Greenblatt, Avi Berkowitz were a team of outsiders and non-politicians that upset the applecart of doing things the way they have always been done.ADVERTISEMENT

One story in the book is worthy of note in motives and hypocrisy. The political grandstanding trip to Israel of Congressmembers Ilhan Omar and Rashida Tliab wins that honor. While their trip was eventually blocked by the Israeli government, Friedman unveils the true motivation of the visit and the itinerary of the Congressional duo. They were, in effect, going to Israel to promote ongoing efforts toward promoting the BDS movement. In fact, the organization “Miftah” was footing bill for the trip. “Miftah’s” claim to fame is that they accused Jews of drinking the blood of Christians on Passover. Friedman noted, Miftah was forced to apologize for the statement. For full disclosure, Friedman noted that a full bipartisan Congressional delegation visited Israel just weeks before.

More importantly is the postscript of the story. Congressmember Tlaib protested over her not being able to visit her grandmother in the west bank because Israel would not give her entry to the country. It was Ambassador Friedman who called Prime Minister Netanyahu to ask that the Congressperson be allowed to enter for the purposes of visiting family on humanitarian grounds. Netanyahu agreed immediately. After all the work and compassion to reunite a family, Congressmember Tliab declined the visit. So, you cannot help but wonder what her true objective was.

Powerful and illuminating flashpoints in the book are explored during work on the Abraham Accords, building the American Embassy in Jerusalem, the relationships between the Palestinians and Israeli government, the visit of President Trump to Israel and the daily challenges of the job. In each instance, Friedman’s insight and commentary allows you to see the very nature of leaders we see on television and read in our newspapers.

“Sledgehammer” is a must read for those who are interested in Middle East Peace and the eb and flow of Washington DC and Israeli politics. If I have one critique of the book it is the title. I admit it is personal. As someone who has had the opportunity to meet and talk with both Ambassador David Friedman and his father Rabbi Morris Friedman, I would have titled the book “Peace through Strength.” The Rabbi knew President Reagan and, the son knew President Trump. Somehow the phrase “Peace through Strength” applies to all four men. That might be why the phrase “Peace Through Strength” is associated with the Friedman Center for Peace today.

ABOUT THE AUTHOR
Michael “Scott” Cushing serves as Special Advisor to the Nassau County Executive on the Combating Antisemitism Task Force. He also serves on the Community Advisory Board of Northwell Long Island Jewish Hospital, Valley Stream, New York. Further, he is former Publisher and Editorial writer for the Gateway-Bulletin Newspapers. He served in senior staff positions for the New York State Assembly and New York State Senate for over twenty years. He is active in Israeli and Jewish affairs in Nassau County.